Gunter (ギュンター Gyuntā) is a playable character in Fire Emblem Fates and an ally in the prologue and the Conquest and Revelation routes. He is voiced by the late Rokurō Naya in the Japanese version, and by D.C. Douglas in the English version.

A Knight who has served the Kingdom of Nohr for a long time and has made a name for himself with distinguished service in the past. In the later years of his life, he became a teacher in the art of warfare combat. He has a strict, yet kind personality. His latest student is Avatar and decides to follow them down the path they choose in the great war between Hoshido and Nohr. His birthday is June 13.

Gunter, along with Felicia or Jakob aid the Avatar in dueling with the Hoshido captives, Rinkah and Kaze. Afterwards, they look to seize Hoshido territory near the Bottomless Canyon, in which they succeed, though Gunter is pushed off into the Canyon by Hans.

Gunter doesn't return after falling from the Bottomless Canyon unlike the two other routes. Although he is presumed dead, Gunter is likely still alive just as in the other two routes, but can't leave Valla to join the Avatar and Hoshido.

Gunter is only playable until Chapter 3, where he supposedly dies when falling into the Bottomless Canyon. In Chapter 15, Azura and Avatar visit Valla, in which they discover Gunter survived, as the Bottomless Canyon was actually a portal into Valla. The three are ambushed by Vallite soldiers, but they manage to escape and return to the surface, where Gunter rejoins the army.

Like with the other two routes, Gunter falls off the bridge in Chapter 3. However, like in Conquest, he survives and rejoins the army in Chapter 7.

However, in Chapter 26, Gunter is revealed to be a traitor, having killed Scarlet during the party's descent into the Valla Kingdom when Anankos took over his body all along. After being defeated, the Avatar and Xander attempt to persuade him while Azura starts singing to banish the presence controlling him. Gunter struggles to control himself, but at the last moment he stabs himself, forcing the presence out of him. While being healed, he reveals that Garon was responsible for killing his wife and child, along with everyone in his hometown and that originally wanted to use the Avatar for revenge against Garon and the Kingdom of Nohr, despite his recent actions and confession, the Avatar forgives him, much to his deep confusion. Gunter was unaware that the Garon who killed his wife and child is none other than an imposter created by Anankos.

In Chapter 27 it is revealed the true goal of Garon in Chapter 3 was to put Gunter in Valla, where Anankos would make him his chosen vessel. After Anankos is defeated, Gunter watches the Avatar's coronation from afar, and leaves silently. Is is also implied in all three routes that Gunter was the non-Royal Knight who visited the Rainbow Sage in the past.

Revelations reveal a bit of his backstory; Gunter was married once and had a child. When given the opportunity to accept dragon blood from Garon, he refused, stating that he wanted to be with his family. In response, Garon ordered his soldiers to go to destroy his village and his family. He reveals that he only befriended the Avatar so that he would be able to avenge his wife and child. As a result, he developed a hostile view towards royalty, believing that common folk like him were like pawns for their schemes or weeds to be cut down on a whim.

Gunter is the stereotypical Jagen unit of the game being a powerful beginning unit because he is pre-promoted, but ultimately losing effectiveness in the later game. In reality, he is only a true Jagen in the Revelation route as that route is the one you get him at the start of the route. In Conquest, you get him mid game and in Birthright, you do not get him at all. Unfortunately, he has some of the poorest stat growths out of all units in the game, making him a hard sell for a serious long running unit, especially when the player has four other units in the two routes he is playable that can promote into his base class, the Great Knight. Regardless, Gunter starts off with his Cavalier skills built in, which is good considering that he is a formidable tank for the early game and can safely rescue wayward units thanks to Shelter. In Revelation, if willing to train him two levels, he can learn Luna for more early offensive prowess. However, as a Jagen, he is an exp sponge, requiring a lot of EXP to level up in the early game, something the player is better off spending on their beginning units. Gunter is, however, a good beginning supporting partner for the Avatar as his personal skill Forceful Partner increases the Avatars Hit Rate by 15 and damage dealt by 3 if he is the supporting unit to an Avatar lead battle. Overall, he is good for the early game, but there are better units to put time into training than Gunter in the long run. Keep in mind that Gunter can only for Supports with the Avatar and Jakob. And for those two, he can only have supports in the Conquest route and cannot form them in the Revelation route.

If the player is willing to train him, he can slide into the Paladin class for more even stats, though there is nothing really to write home about aside from Defender so he can be even more sturdy as an early game tank and Aegis to shave off damage, especially magic damage.

Gunter - Inveterate Knight
Gunter disappeared soon after the war ended, never to be seen again. Scholars continue to debate if he died soon afterward, or if he found a quiet place to spend the rest of his days in contemplation.

Gunter is derived from the elements gund "war" and hari "army, warrior". This was the name of a semi-legendary 5th-century Burgundian king. 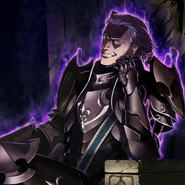 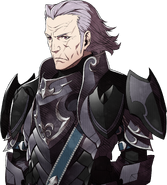