Chapter 13: In Search of Truth

Myrmidon
[view]
“Just when I've finally found some work, now I have to throw it all away. This is all your fault!”
—Guy to Matthew when first recruited by him.

Guy is a playable character in Fire Emblem: The Blazing Blade. He is a confused swordsman from Sacae's Kutolah tribe who wishes only to be the greatest sword wielder in the world. He will do what he has to do to survive.

Guy appears as a Sticker in Super Smash Bros. Brawl.

While living in the village of his tribe, Guy had heard stories of the village leader's son, Rath, but he had left the village sometime before. Three years prior to Eliwood's journey, Guy left Sacae on a journey to become the greatest sword wielder. It is revealed in one of his Support Conversations with Rath that he left due to him not being able to use a bow well nor hunt, but was told by the leader of his tribe that he had a good sword arm.

Two years later, Guy found himself in Caelin without any money or food. He collapsed, but was saved by a thief named Matthew, who fed him four pieces of meat. Guy thanked him and promised he would repay him. Matthew never forgot his promise. Ironically, Guy said he owed Matthew his life, then took it back. In a support conversation with Matthew, he even wrote down he owed Matthew his life on an oathpaper.

One year later, Guy found himself penniless again, but joined a group of mercenaries so he would not go hungry again. He starts as an enemy against the player in Chapter 13 in Fire Emblem: The Blazing Blade, however, the player can recruit him by having Matthew talk to him in the Player Phase.

In his ending, it is said that by perfecting his form he gained the title of "Saint of Swords", which would also be the new title of Karel (though due to translation mishaps, it may have meant his skill was able to match that of the Sword Saint).

Guy is very jumpy and stutters often as denoted in his supports with Matthew and Rath. He also looks up to Karel and wishes to become his apprentice so he can become the greatest sword wielder in the world.

Description: A youth from Sacae. Yearns to be a swordmaster.

Guy's Strength, despite its low growth, is good at base; especially when wielding the Killing Edge he starts with. However, often times it is better to trade off the Killing Edge to someone who can make better use of it, such as Lowen, Marcus, or the Christmas Cavaliers when they arrive. His Speed is high in both base and growth, alleviating his low Constitution - he will outspeed most other units in the player's army. These make him potent in the early chapters, where he can reliably double enemies that other units cannot. He tends to fall out of relevance in the later chapters, where enemy Speed becomes less of an issue and enemy axe users become less common. His poor Strength growth and 1-range sword lock will hinder his usability when faced with Wyvern Lords, magic units, and anything with a Javelin.

If the player does wish to use Guy long-term, early promotion is viable. Apart from Speed and Skill, his growths are below-average - once those two stats are capped, he has little to gain from further leveling as a Myrmidon, and will get more out of the instant promotion bonuses.

Due to his high Skill, low enemy Luck, the boost from his class, and possibly through support bonuses and S-ranking swords, Guy can have an extremely high Critical rate as a Swordmaster. Unfortunately, this will only show returns against enemies with low Defense; 0 times 3 is still 0.

“I will be... the best... swordsman in all of Sacae...”
—Death Quote
“Let me show you how much my blade has matured!”
—Final Battle Quote

Against Uhai:
Uhai: Oh... so you are from Sacae.
Guy: I am Guy of the Kutolah!
Uhai: Kutolah... the Silver Wolf, Dayan's tribe! They're said to be the strongest on the plains. But you're still a child. Do you fight like one?
Guy: No!
Uhai: Then show me. Come!

Guy - Mounted Swordsman
Guy continued in his quest to be the finest swordsman in all of Sacae. His form was so perfected that all called him the Saint of Swords.

They fell in love amidst conflict, but Priscilla was a noble and Guy was but a mercenary nomad. Guy rode way before her tears could stain the earth, but Priscilla's bright smile remained in Guy's memory forever.

Guy is illustrated in the trading card game Fire Emblem Cipher with the following cards: 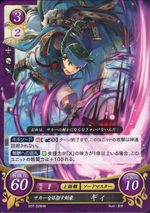 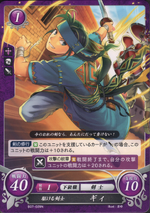 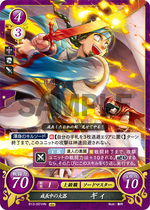