Map 5: Beyond The Legend

“The humans of this world, ignorant of her plight, called her a monster, a demon. Warriors from across the land came in search of fame by hunting the Demon Dragon. And when they couldn't kill Teeta, they killed themselves against her... Over... and over... and over... It made me realize something. This world is beyond redemption. There will always be humans who are willing to kill and manipulate for their own greed, like those warriors, or King Glaus... They used a pure, innocent girl for their own rotten ambitions. If humanity is willing to make my Teeta suffer, then humanity has no right to live. And so, Teeta and I will become gods, and we will start this world over again.”
—Gwenchaos, in a conversation with Tia

Gwenchaos (グエンカオス Guenkaosu, fan translated as Guenchaos) is the main antagonist of TearRing Saga: Utna Heroes Saga. He is the leader of the Gerxel Church and seeks to resurrect the dark dragon, Gerxel, through a ritual that requires the four shamans (Enteh, Katri, Tia, and Neyfa) as sacrifices. He was once the Sage of Earth, one of the Four Sages and finest students of the White Master Morse, but was cast out after he betrayed the others and unsealed the forbidden ★Zahhak spell.

It is noteworthy that Gwenchaos is never fought by the player when he's human, although he does have scripted fights with Ezenbah, Richard, and Tia.

Until forty years prior to the game's events, Gwenchaos was a priest of the Temple of Earth and the husband of Princess Teeta of Leda. After Teeta was forcibly transformed into the holy Earth Dragon, Kranion, and banished to the remote northern mountains, he watched over her and observed as many men were sent to slay her. Witnessing the brutality of the men hunting Teeta caused him to gradually lose his faith in humanity. He eventually began his mission to revive Gerxel in order to destroy humanity and reunite with his wife in death.

After the destruction of Leda, Gwenchaos became the leader of the oppressed Zoans in Zoa Valley and started a large-scale revolution there. He eventually conquered the Temple of Earth and formed the Theocracy of Gerxel, consisting of several areas in Leda. On the day that Karla was intended to be executed by the people of Reeve, Gwenchaos saved her. He later ordered her to manipulate King Bahanuke of Canaan through seduction after the latter declared war on the Gerxel Church. Over time, he killed two of his fellow sages, Mios and Octavas.

Gwenchaos is introduced when he arrives at the Temple of Mars in search of Enteh and fatally wounds Ezenbah. Over the course of the game, he succeeds in gathering the four shamans and begins to sacrifice them one by one. During the final part of the ritual, he notices Tia's striking resemblance to Teeta and decides that he will let her live for a while longer if she becomes a replacement for his lost wife. Around this time, Gwenchaos is betrayed by Richard, whom he kills soon afterwards. After Tia manages to wound him, he calls for power and transforms into Gerxel. Following Gerxel's death at the hands of Runan, Holmes, Sennet and Tia, Gwenchaos's and Teeta's souls are freed by Miradona, who allows them to ascend to the afterlife. 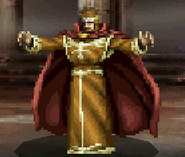