Member of the Ostian Armor Knights

Cherami Leigh
[view]
“The weight of a knight's armor is a symbol of his loyalty.”
—Gwendolyn in a support conversation with Lilina

Gwendolyn is a playable character in Fire Emblem: The Binding Blade. She is a knight of Ostia and is the younger sister of Bors. She first appears on turn 5 of Chapter 8 of The Binding Blade, along with Ogier and Barthe, in the northwest corner of the castle. The group assists the Lycia Alliance Army in retaking Castle Ostia. She then joins Roy's group for the rest of his journey. It is notable she can perform a Triangle Attack with Bors and Barthe.

She makes a brief cameo appearance in chapter 18 of the Fire Emblem: Hasha no Tsurugi manga.

When a rebellion in Ostia headed by the well-respected general Leygance and a former lieutenant named Devias broke out, Gwendolyn, alongside Barthe and Ogier, were apparently absent from Castle Ostia. They returned, however, to save Lilina, who had been imprisoned and used by the revolutionaries. Upon their arrival, they met up with Roy and his army, who were engaged in a battle with Leygance to stop the rebellion. Under Roy's command, they helped to defeat Leygance, ending the revolution and saving Lilina. Afterwards, Gwendolyn, along with Barthe and Ogier, joined Roy's army on a journey to stop King Zephiel of Bern from eradicating the humans of Elibe.

After the war, she continued to serve as an Ostian Armor Knight, rising through the ranks to become their first female captain.

Strong willed and straightforward, Gwendolyn sticks to her convictions, even if she neglects the self-disciplining that is required of a heavy knight.

Having lost her parents, Bors is the only family she can rely on. Due to being raised in those circumstances, Wendy deeply respects her older brother, and aims to be a heavy knight herself, as it can even be said that she unmistakably personifies the spirit of one, training daily the best she can.

On the other hand, despite being proud of being a heavy knight, she has been developing a “girl’s consciousness”, as she worries that people will see her as much larger than she actually is due to the armor she wears.

Gwendolyn is generally regarded as one of the game's least useful units. Her joining situation is extremely bad, owing to being low-level and having very low stats even by the standards of a low-level unit. In fact, her bases are some of the worst in the game, significantly lower than her brother Bors despite their gap in joining time. Most enemies on her joining chapter can one-round her, which is a situation that does not play well with her low Movement of 4 and melee focus. The low accuracy of lances and her extremely poor Skill mean that she will miss very frequently, and enemies will usually respond by striking her down. To add insult to injury, the following chapters being very heavy on axe-users will force weapon triangle disadvantage onto her already poor accuracy and survivability. Raising Gwendolyn on higher difficulties will require you to slow down the entire army just to ensure she can get kills at all, and for much of that early period, she will be liable to die at any moment. It may take multiple chapters just to raise Gwendolyn to the point of her being able to survive combat, and it will take even longer for her to catch up to the rest of the army.

While her bases are notoriously poor, Gwendolyn's growths are acceptable and her General promotion bonuses are quite high, meaning that if the player is willing to tough it out, she can indeed become a somewhat viable frontliner. Compared to other melee units upon promotion, she will possess slightly above-average Strength and Speed, distinctly above-average Defense (though not to the level of fellow armors or the two Wyvern Riders), and her solid Luck means she will rarely face criticals, making her competitive in a pure brawl. Unfortunately, another place where Gwendolyn suffers is her class. Neither of its weapon types are very accurate, and it has the worst movement of all standard combat classes. With the heavy focus on racing to objectives in fast-paced seize maps, Gwendolyn will either need to be ferried around or slog behind the rest of the army. A small saving grace is that unlike the other Generals, her Con is low enough for her to be rescued by all mounted units except promoted Melady.

Another issue for her is when she can promote. She needs a Knight Crest, and the player most likely wants to use the first one on a Cavalier. The second one doesn't appear until the end of Chapter 15, and that's after characters like Melady and Perceval, who outclass her and almost every other character in both mobility and combat, join. Chapter 15 is also quite late to have her stuck without one of her few saving graces, her great promotion bonuses. The player can buy as many Knight Crests as they can afford in Chapter 16, so if they insist on promoting her that late, it can be done. At the end of the day, though, she is a very long way from the game's only lance-user, and many of the others are much stronger and more mobile than her, with prominent examples including Melady and Perceval.

In total, Gwendolyn is not unsalvageable, but offers almost no meaningful advantages over other units. Armored units have very little niche in Binding Blade's gameplay, and Gwendolyn can only perform their traditional duty after significant training. She should only be utilized if the player cares about her character, or enjoys raising weak units.

As one of the Lance Armor units available from the very beginning of Heroes, Gwendolyn has been an accessible budget unit great for using in the Arenas for the purposes of increasing scoring. On her own, she has solid Atk at neutral 30 and a high physical bulk of 38 Def on 49 HP. While she may not have the strongest Res at 28, it can allow her to take a few hits from some mages. Her Spd is low at 24, a common trait of most armor units, but as an armor unit, she has easy access to skills that easily cover this. While she may not be the most explosive armor unit nor has any particularly noteworthy quirks, by the virtue of being an Armor unit Gwendolyn has enough advantages through inheritances that make her a solid investment in the long run.
She initially carried a Killer Lance which had decent mt and could accelerate her special cooldown. With the Weapon Refinery system, she could evolve it into a Slaying Lance for a bit more Mt. Finally in Book IV, Gwendolyn received her own personal lance, an even higher Mt verson of her default weapon, the Weighted Lance. With the special refined effect, if her HP is at 50% or higher at the start of combat, she gains an additional +4 Def/Res and also accelerates her special cooldown per attack. This allows her to quickly charge her Special attack, greatly increasing the damage output that she is lacking otherwise.
Escutcheon decreases damage taken by adjacent foes by 30% upon activation. While it does make her even more pseudo-bulky, it is better replaced with a damaging special. Drag Back lets her move back one space after combat that she initiates. Hone Armor grants adjacent armor units Atk/Spd +6 at the start of her turn, giving her strong synergy when paired with other armor units.

Gwendolyn's magic bulk is passable, but not enough to avoid being taken out by powerful green mages like Nino, Sonya, and Julia. Her status as an armor unit also makes her vulnerable to armor slaying weapons like the Hammer or units carrying weapons like that such as Bartre and Frederick. If using Distant Counter, units who can negate this effect, namely Dazzling Staff units or Brave Lyn prevent her from counterattacking.

Gwendolyn's inheritances are the standard armor package. Swap or Pivot for additonal movement via her support skill. Bonfire as an easy inherit that takes her 38 Def and turns it into 19 true damage when it activates. Distant Counter allows her to counter ranged enemies. Vengeful Fighter or Bold Fighter allow her double attack during the enemy turn or player turn respectively while accelerating her special. Skill C can be swapped out with other armor skills, the most notable being Armor March to boost her movement as well as her armor ally's movement.

Gwendolyn - Beautiful Knight (可憐な重騎士 Karen na Jūkishi lit. Lovely Heavy Knight)
"Gwendolyn chose to live her life as an Armor Knight. Her actions gave courage to many, and she is still remembered today as the first female captain of an Armor Knight squad."

Gwendolyn is illustrated in the trading card game Fire Emblem Cipher with the following cards: 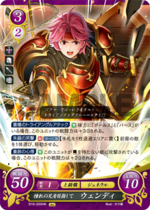 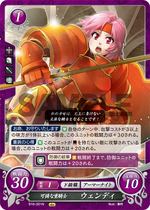 Gwendolyn (from Welsh gwen, meaning 'white, fair, blessed', and dolen, meaning 'loop, link of a chain, ring, bow') is a feminine given name, in general use only since the 19th century. It has come to be the standard English form of Latin Guendoloena, which was first used by Geoffrey of Monmouth as the name of a legendary British queen in his History of the Kings of Britain. He reused the name in his Life of Merlin for a different character, the wife of the titular magician "Merlinus", a counsellor to King Arthur.

Wendy, though sometimes used as a diminutive of Gwendolyn, its existence as a feminine name is owed to the character Wendy Darling from the 1904 play Peter Pan and its 1911 novelization Peter and Wendy by J. M. Barrie.