Halberdier
[view]
“If not for a whim of His Majesty, I wouldn't be here today... Now, let us enjoy the gift we have been given.”
—Hafedd in Path of Radiance

Hafedd is an enemy character from Fire Emblem: Path of Radiance and the boss of Chapter 27. He is happy to meet Ike and his army because he enjoys fighting worthy adversaries. He does not seem to be very racist towards laguz and instead commends them for their fighting skills. When fighting Reyson, he says that he would have asked him to sing a galdr had they not been at war. He also tells Ike in their battle conversation that his curiosity knows no bounds, and that he would like to know more about the relationship between Ike and the Black Knight.

He is notable as the bearer of the last Occult Scroll available in the game and also as the only enemy to come equipped with a Knight Ward. To make the most out of Hafedd, have Volke steal his Spear, have him shoved immediately afterward and, finally, attack him from range. Alternatively, you can steal his Brave Lance and have two, along with Geoffrey's. He is also the only enemy other than Ena and Seeker known to have the Miracle skill.

“If not for a whim of His Majesty, I would not be facing you here. For a warrior, meeting a powerful foe is a joy above all others... And for this I give thanks to the king! Now, let us enjoy the gift we have been given.”
—Hafedd

Ike: Is the Black Knight in there?
Hafedd: Yes.
Ike: Step aside. I have business with him.
Hafedd: Aha... It would seem you and Sir Knight have some connection! My curiosity knows no bounds, but... Before you reach Sir Knight, you must first vanquish me! 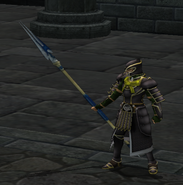