Haitaka (ハイタカ) is a capturable boss character who appears in Fire Emblem Fates on the Conquest route. He is a General of Hoshido who is in charge of commanding a small band of Hoshidan army occupying Fort Dragonfall.

Haitaka is only encountered on the Conquest route. Haitaka and his men captured Azura, believing her to have played a role in Queen Mikoto's death due to being born in Nohr.

Fortunately, Corrin's army notices his group as they pass through the fortress on their way to Notre Sagesse under Garon's orders, and free Azura from Haitaka's men. In the ensuing battle, Haitaka is defeated and either falls in battle or is captured and persuaded to fight alongside the Nohrian army.

It is later revealed by Hinoka that Haitaka and his men had gone rogue following Mikoto's death, intending to take matters into their own hands.

Haitaka will be added into the Unit Logbook as soon as he is persuaded to join the player's army in Conquest. In order to use him in either Birthright or Revelation, both of the said paths of Fire Emblem Fates must be purchased through the same cartridge or same saved data on the Nintendo 3DS.

Owing to the minor role Haitaka is involved with the plot, his personality is largely undeveloped. One can still depict several aspects of his character based on his actions and the lines he speaks. For one, Haitaka is depicted as an individual who takes matters into his own hands, and proceeds with his initiative plan without questioning regardless if it means having to disobey his hierarchy. As shown in the Conquest route when he kidnaps Azura without reasoning, and attempts on killing her believing she played a role in Mikoto's murder due to her ties with Nohr. More of this is hinted when Azura, upon being rescued, explains to Corrin that the nobles even stood up for her, saying she took no part. Which lead to the few soldiers spear-headed by Haitaka, himself, to go rogue and kidnap her. This fact is proven when Azura meets Hinoka on the battlefield, and Hinoka apologizes about her siblings being unable to prevent her capture from happening.

On the battlefield, Haitaka can also be depicted as a prideful individual as he tends to berate his enemies by addressing them as "pawns", and hopes of teaching them a lesson by filling his role as a General who excels proficiency with the spear in Hoshidan combat despite the odds being against him. One can notice he is easily ashamed of his honor when he mumbles about during his defeat.

As a boss, Haitaka is surprisingly competent for an unpromoted foe, but he is not exceedingly menacing. It is advised to capture him regardless of the mode being played, as he starts out with Rally Defense in all modes, which is extremely useful in the Conquest route. Capturing him on Hard is highly recommended as he will also come with Strong Riposte, a very useful skill when enemy units attack him. He also comes with Seal Defense on Lunatic, but this simply avoids some grinding time as Haitaka can learn this skill normally.

Ideally, Niles should move in to capture Haitaka. Whittle his health down carefully, as an unexpected critical or offensive skill activation will most likely kill Haitaka. Have Niles deal the finishing blow with "Capture"; if Niles does not get Haitaka, heal him with Elise, use Azura's song to have him attack or retreat to safety, or have Silas use Shelter to bring Niles out of Haitaka's range, if he is going alone.

Haitaka's base class is the Spear Fighter, which branch out into the Spear Master and Basara classes. From the Spear Fighter class, Seal Speed works nicely alongside Seal Defense, and Lancefaire helps boost his damage output. Since Haitaka's normal classes have access to Lances and Naginata, Lancefaire therefore acts as a neat complement to his combat capabilities. From the Basara class, Haitaka can learn his only offensive skill, Rend Heaven, one that boosts his damage output depending on the Strength of his foes. Quixotic, conversely, helps increase his chances of activating Rend Heaven, allowing him to land increased damage on foes more consistently. Given these facts, it is thus advisable to raise Haitaka as a Basara first so that he will be more effective Spear Master once he has learned the Basara's skills.

Compared to Oboro, the playable Spear Fighter for Birthright and Revelation, Haitaka has stronger growths in most stats except for Magic, Luck, and Defense. While these do not detract from him too heavily, the incredibly low Magic growth it makes it harder for him to be a permanent Basara like Oboro can. Haitaka can be used in both Birthright and Revelation once he is recruited in Conquest, as he is automatically put in the Unit Logbook when this happens. Haitaka's most glaring disadvantage over Oboro, which applies to most Capturable units, is his lack of a personal skill, inability to form supports, an absence of reclassing options (outside of DLC tomes), and a shallow skill pool. This does make Haitaka incredibly rigid in build that limits his flexibility in suiting roles missing or needed in the player's forces, however he is still usable as he can deal more damage than Oboro.

Haitaka is the Japanese name for the Eurasian sparrowhawk (Accipiter nisus).

This bird-based naming convention is shared with Kumagera, another capturable Hoshidan general. 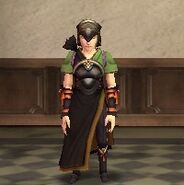 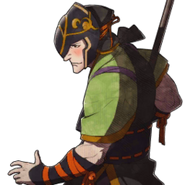