Chapter 4: The Land of Sorrow

Sean Chiplock
[view]
“The Tower of Duma lies just ahead. It would be wise to approach with caution.”
—Halcyon talking to Celica

Halcyon is a non-playable character in Fire Emblem Gaiden and its remake, Fire Emblem Echoes: Shadows of Valentia.

Originally the High Priest of the Duma Faithful, he lost his position to Jedah after they had a dispute and escaped to Sage Hamlet in defeat. Known as the Great Sage of Duma, he lived at the edge of the village. During the game, he reveals that Mila is actually sealed within the Falchion, which is located beneath Duma Tower. Celica asks Halcyon if he can possibly help Alm. Halcyon unlocks Alm's potential, allowing him to promote to the Hero class whenever he wished from that point onward.

In Shadows of Valentia he also took in and raised Conrad after he survived the fire that destroyed his childhood home.

Halcyon is derived from the Greek name Alcyone. It is modernly used to denote a period of time in the past that was idyllically happy and peaceful, normally used in the phrase "Halcyon Days". 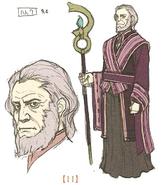 Halcyon as he appears in the Fire Emblem Gaiden manga. 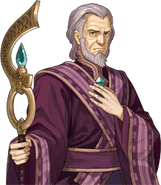