Axe Fighter
[view]
“Calm down, Osian. If we just run in without thinking, we'll just get beaten down.”
—Halvan to Osian.

Halvan is a playable character in Fire Emblem: Thracia 776. He is a member of the Freeblades of Fiana, and Osian's best friend. He resides at Fiana with his sister, Patricia.

Halvan first appears in Chapter 1, where he joins Leif and Eyvel on their mission to quell Raydrik's invasion of Fiana and save Nanna and Mareeta. Halvan can visit his home in this chapter, where his sister Patricia will gift him an axe that she had obtained from what she describes as "a strange old lady" who had emerged from a lake.

Halvan, along with the rest of the Freeblades of Fiana, is later separated from Leif and Eyvel in Chapter 3, as the prince is captured by Raydrik. Vowing to save Leif, Halvan, along with Osian and Ronan, embark on a quest to Munster, but are captured by Hannibal's patrolling troops when they are found roaming around Munster Castle. The trio regains their freedom at the end of Chapter 7 on Leif's behest.

In Chapter 8, Halvan can speak to Marty to recruit him to Leif's cause. Speaking calmly, he will ask Marty if he truly intends to betray Dagdar and Eyvel, which proves to be more than enough to convince the man to join Leif's army.

Halvan then goes on to continue supporting Leif in his cause to liberate Northern Thracia from the Grannvale Empire. He will return to Fiana thereafter, where he becomes the leader of the village, his wise rule causing it to prosper and flourish.

Calm and collected, Halvan is able to retain his cool even in the most stressful situations. This can be seen in Chapter 1, where, in contrast to Osian's insistence to rush out and fight the bandits invading Fiana, he rationally urges him to calm down and reassess the situation.

Halvan serves as a decent combat unit, Vantage and the Brave Axe forming a powerful combination that allows him to deal two powerful blows to the enemy before they can even initiate combat.

Furthermore, Halvan joins early and is capable of ORKOing many enemies throughout Thracia 776. While he does not stand out with any unique strengths, he is still serviceable as a good filler unit if you need more combatants in your army.

"After Eyvel departed Fiana, Halvan took up the role of village leader and Commander of the Freeblades. He quickly demonstrated his talent for leadership, and Fiana developed and expanded under his wise rule. Nowadays, Fiana is the envy of every village on Thracia's east coast."

Halvan is illustrated in the trading card game with the following cards: 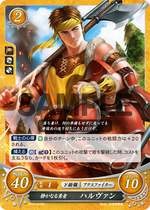 Halvan, as he appears in the fourth series of the TCG as a Level 10 Axe Fighter.

A portrait of Halvan from the Thracia 776 Illustrated Works