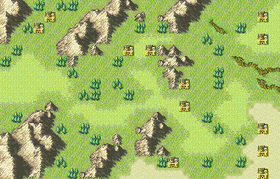 Survive for 11 Turns or defeat Aias

Cormag (talk to with Eirika), Amelia (if not recruited in Chapter 9)

Chapter script
[view]
“Jehanna, home of dancing white sands. This largely barren desert nation is infamous for its mercenary forces. In accordance with her husband's dying wish, the beautiful Ismaire rules Jehanna. The Queen of the White Dunes governs Jehanna with grace and honor. When he was young, her son left Jehanna. His whereabouts remain unknown. After passing through Caer Pelyn, Eirika arrives in Jehanna. There, she finds the nation embroiled in combat with Grado's forces.”
—Opening Narration

Hamill Canyon is Chapter 13 of Fire Emblem: The Sacred Stones when taking Eirika's route. You will receive 5000 gold at the end of this chapter.

This chapter is a defense chapter, where you need to hold out for 11 turns. Alternatively, you can kill Aias, which will end the chapter immediately.

The player does need to be aware that killing Aias extremely early will prevent Cormag from appearing (he appears on turn 5). It will also prevent you from recruiting Amelia if you did not recruit her in Chapter 9. While Cormag is easier to recruit and defend, Amelia will prove to be a bit of a problem to protect given her low stats and the strength of the enemies nearby.

Aias carries a Short Spear, Silver Blade and Swordslayer. You should keep Joshua away from Aias if he is deployed, as a hit will kill him almost immediately given its massive bonuses against sword users. As he is a Great Knight, he is weak to a slew of anti-armor/beast weapons. This means you can take him down with Joshua if he has a Zanbato or Armorslayer equipped, but if Joshua is going alone, ensure that he will kill Aias in one battle. Otherwise, you risk having him die the next turn from Aias' Swordslayer.

If you plan to endure all 12 turns, you will also have to deal with Pablo who you had fought earlier on. His Purge tome can be quite problematic to deal with all the enemies that continually appear.

After completing, Hamill Canyon may be attacked by these monsters:

Fog of War may occur, and the Ballistas will still be there.