∞
[view]
Hana's Katana is a Katana that is introduced in Fire Emblem Fates. Eponymously named after Hana, Hana's Katana is a defensive weapon, as its Might is doubled when it is wielded during counterattacks, although this is offset by its inability to perform double attacks. Like most other Katana, Hana's Katana reduces its wielder's Defense and Resistance by 1, but raises their Speed by 1.

Hana's Katana is similar to the Venge Katana, the only differences being that Hana's Katana can be used at a lower weapon rank, deals less damage, gives less avoid penalties and most notably, is unable to perform follow-up attacks.

The katana (刀), was the go-to weapon for all samurai of Feudal Japan. Katanas are characterized by their curved, single edged blade.

The rei in the weapon's Japanese name is based on the word kirei (綺麗), which means "pretty", or "beautiful". 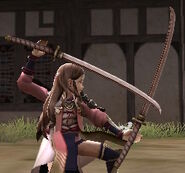