Hana was voted as the 21st most popular female on Nintendo's official Fates character poll. 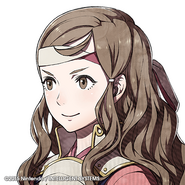