Teacher at the Officers Academy

Chapter 8: The Flame in the Darkness (Optional)

W. T. Falke
[view]
“You've already heard about it, I presume. It seems they're doing mock battles between classes. That said, I'm not making much progress in my research regarding your Crest... Your flesh... No, your blood is fine. Leave a few drops there.”
—Hanneman talking to Byleth about their Crest

Hanneman is a character in Fire Emblem: Three Houses. He was formerly a nobleman of House Essar, but currently serves as an instructor at the Academy, where he offers lessons in Bows and Reason. He possesses a minor Crest of Indech.

Hanneman is a teacher at the Officers Academy. He is a scholar who studies the power of Crests. He became a scholastic authority on Crestology throughout the Adrestian Empire in 1159. He had a sister, who did not have a Crest. Due to being in a family where Crests were prevalent (his father bearing a Major Crest, and both himself and his grandfather possessing Minor Crests), his sister (who did not have a Crest) was married off to another noble whose influence was waning and desperately desired a Crest bearing child. All of the children produced from their marriage did not bear Crests, and she eventually died, the primary cause being heart disease. Hanneman believed otherwise, believing that it was Crests that caused his sister's early death. Though he was styled as "von Essar", he renounced his peerage in 1164 following his sister's death.

The grief-stricken scholar absconded to Garreg Mach Monastery a year later. Though he had always been fascinated by Crests, his current goal is to find a way to make Crests easily available to anyone who would want one, believing that if everyone had access to Crests the value placed on Crests in society would diminish, so that what happened to his sister wouldn't happen to anyone again.

Hanneman becomes acquainted with Byleth when they first arrive at the academy as the third professor teaching the students. After allowing them to visit the three house representatives, he and Manuela allow Byleth to choose the house they wish to teach, taking one of the other two left after they make their choice.

Two days later, Hanneman invites Byleth to use a special device to see if they hold a Crest while giving Byleth a run down of what they do. When Byleth uses the device, Hanneman is shocked to discover a brand new Crest never seen before.

Hanneman is an avid scholar and one of the most academically intelligent members of the Academy Faculty. He focuses on studying crests in particular, unable to contain any excitement whenever he has a new discovery. This does make him a bit pushy with certain students in order to learn as much as he can, though usually respects their boundaries if he senses uncomfortably such as Lysithea's twin crests.

The death of his sister impacted Hanneman greatly, as he renounced his peerage because he felt incapable of protecting his sister. The incident also made him become a Crest scholar so he could learn how Crests work so they could be distributed to anyone who wanted one, and as such, he doesn't hold a high view with how Crests influence society, and if he was successful, he would honor his sister's memory. He generally shows no affiliation for his Crest research, having abandoned his position in the Empire to obtain a better research environment, as shown in the Crimson Flower route where he may return to the Empire to continue his research.

He has somewhat of a shaky relationship with his fellow colleague Manuela as the two often get into verbal spats, though they maintain a professional accord in front of students, even if they marry each other.

*He can use the Fire spell due to the Fire ability.

Hanneman can serve as a standard mage thanks to his good magic growth, along with above-average dexterity and resistance, and acceptable charm, luck and health. His main weakness is that he is slower than all of the other main mage candidates, having a poor growth in it, so he can be easily hit by doubled attacks and won't make many of his own. Additionally, despite his proficiency in bows, his strength stat is unimpressive, and his below-average defense means physical attackers can take him out easily. He can only be recruited upon reaching Chapter 8, by which point he may be surpassed by various other mages. His personal skill is basically a built-in Rally Magic, giving him some supportive capabilities.

Thankfully, Hanneman has a good list of spells at his disposal, including Meteor, though he still won't compete with Lysithea for raw damage, nor Dorothea or Annette in utility. Meteor does enable him to provide Linked Attack and Gambit Boost bonuses from extreme ranges, however, only requiring that he equip the spell. He does have a strength in Riding, however, so he can make for a good Dark Knight, though it will not provide him additional spell charges (which can be a serious drawback for Meteor). Thanks to his high magic stat and strength in Bows, he can make for an ideal user of a Magic Bow. Additionally, he is able to learn Ward Arrow if he trains enough in Bows, allowing him to Silence enemy mages.

Though Fódlan had changed, Hanneman's goal remained unwavering: to determine the workings of the Crests and to do away with the inequality caused by them. To that end, his research resulted in magical tools that could be used even without the aid of Crests. This proved to be yet another worthwhile discovery by the Father of Crestology.

Very soon after Byleth and Hanneman had finished their quiet wedding ceremony, the struggle against those who slither in the dark began in earnest. The pair fought in many battles, eventually bringing true peace to Fódlan. Afterwards, they worked together to pursue Hanneman's goal to determine the workings of the Crests and to do away with the inequality caused by them. Their research resulted in magical tools which could be used even without the aid of Crests. The Father of Crestology and his spouse earned worldwide renown for devising tools that became a cornerstone of progress.

Byleth announced her marriage to Hanneman shortly after being named archbishop of the Church of Seiros. Hanneman provided counsel to the archbishop as she worked to restore the church, but his goal remained to determine the workings of the Crests, and to do away with the inequality caused by them. To that end, his research resulted in magical tools which could be used even without the aid of Crests. The archbishop made good use of these tools, and they soon became a cornerstone for continued progress.

Byleth announced her marriage to Hanneman shortly after becoming leader of the United Kingdom of Fódlan. Hanneman provided counsel to the queen as she worked to restore Fódlan, but his goal remained to determine the workings of the Crests and to do away with the inequality caused by them. To that end, his research resulted in magical tools which could be used even without the aid of Crests. The queen made good use of these tools, and they soon became a cornerstone for continued progress.

As the new Adrestian emperor, Edelgard gave all she had to breathe new life into the government of Fódlan. To that end, Hanneman's research proved invaluable. Seeking to determine the nature of Crests, and to do away with the inequality caused by them, the Father of Crestology produced magical tools that could be used even without the aid of Crests. These were put to eager use by Edelgard, who saw both of their dreams realized. It is not hard to imagine that a pair with such similar ideologies and plans for the future would eventually settle into an affectionate and fulfilling relationship.

Though Fódlan had changed, Hanneman's goal remained unwavering: to determine the workings of the Crests, and to do away with the inequality caused by them. To that end, his research resulted in magical tools which could be used even without the aid of Crests. This proved to be yet another worthwhile discovery by the Father of Crestology. Hanneman also became a father in more literal sense, by raising many children with his wife, Dorothea. Their marriage was not publicly known, however, as the songstress elected to keep it secret for the sake of both of their careers.

After the war, Annette and Hanneman both accepted teaching positions at Fhirdiad's school of sorcery. There, while educating the next generation of mages, they made great strides in their research of Crests and magic. Working side by side, the pair—formerly teacher and student, now partners and colleagues—brought great progress to the world and prestige to their institution. It is said that the wait list for students to enroll in either of their classes was notoriously long.

After the war, Lysithea returned to her parents in Ordelia territory. She was joined by Hanneman, and together the two worked to research a method by which to extend her lifespan. Some years later, their efforts bore fruit, and they devised a procedure to remove her Crests. Afterward, Lysithea renounced her noble claim and continued to assist Hanneman with his research. When he passed, she took up his mantle, and by the great discoveries she made, came to be called the Golden Child of Crestology.

After the war, Marianne and Hanneman stayed in touch and deepened their friendship through letters. When Hanneman's Crest research fell on hard times, Marianne was able to secure Margrave Edmund's financial support to allow his work to continue. The research bore fruit in the form of magical tools which could be used even without the aid of Crests, and the funding allowed these tools to be produced in great number. After Marianne inherited her adoptive father's house, she guided Hanneman to create a branch of research devoted to peaceful applications of Crestology. These advancements, which Hanneman provided, became the legacy of Marianne's later years.

After the war, Hanneman and Manuela held a grand wedding ceremony, to which all of their many students were invited. Later, after the church was transformed and rehabilitated under the supervision of the Empire, the Officers Academy finally reopened, with a renewed focus on accepting students regardless of status and offering classes on a wider variety of practical subjects. Hanneman and Manuela returned to work as teachers, almost as if nothing had changed, and filled the halls with their banter in the way only married couples can.

Hanneman and Manuela (Other routes)

After the war, Hanneman and Manuela held a grand wedding ceremony, to which all of their many students were invited. Later, as Garreg Mach came to be restored, the Officers Academy finally reopened, with a renewed focus on accepting students regardless of status. Manuela and Hanneman returned to work as teachers, almost as if nothing had changed, and filled the halls with their banter in the way only married couples can. Their relationship spawned a trend of romances among colleagues at the Officers Academy, but that is an entirely different story.

Hanneman is illustrated in the trading card game Fire Emblem Cipher with the following cards: 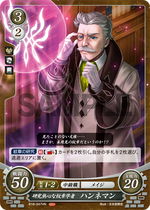 Hanneman is a surname of German and Irish origins. It was encountered the first time in the Gaelic family name "O hEanain,". It can also be an abbreviated version of the surname Henagahn.

Hanneman as a Mage in Fire Emblem 0 (Cipher). 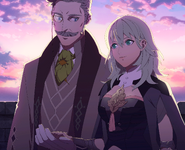 Hanneman's battle model as a Noble.

Hanneman's battle model as a Myrmidon.

Hanneman's battle model as a Soldier.

Hanneman's battle model as a Fighter.

Hanneman's battle model as a Monk.

Hanneman's battle model as a Mercenary.

Hanneman's battle model as a Brawler.

Hanneman's battle model as a Mage.