The Shield of Thracia

General
[view]
“Your Majesty, how many times must I tell you? This battle is futile. Only a cease-fire with the liberation army will allow us the time to strengthen internally. Siding with the empire was an absurd idea. And the populace is now in jeopardy as a result!”
—Hannibal, in a conversation with Travant in Genealogy of the Holy War

Hannibal is a playable character from Fire Emblem: Genealogy of the Holy War who has minor appearances in Fire Emblem: Thracia 776. He is a loyal general known as "The Shield of Thracia" and the adoptive father of Coirpre/Charlot.

Having spent his entire adulthood on the battlefield, Hannibal is considered to be one of Thracia's top generals. Some time before the events of Thracia 776, he found Carrion and his mother, both of whom he invited to live in his mansion. When Leif flees to Thracia after escaping from Manster, Hannibal decides to provide some assistance to him. He also gives Leif access to his mansion, where Dorias, Selfina, and several of their inexperienced knights are residing.

In Genealogy of the Holy War, Hannibal speaks out against Travant's decision to engage Seliph's liberation army in battle because only a cease-fire would give Thracia the time to strengthen internally. He also opposes Travant's alliance with the Grannvale Empire. In Chapter 9, he is forced to fight against his will after Travant takes Coirpre as a hostage to ensure his loyalty. However, he enlists in Seliph's army following Travant's death and aids in fighting against the Grannvale Empire.

After the liberation war ends, Hannibal is promoted to a higher rank in the army of the New Kingdom of Thracia.

In Chapter 9: For Whose Sake, speak to Hannibal with Coirpre/Charlot.

Despite having perhaps the most difficult and convoluted recruitment requirements, Hannibal is among the least useful units in Genealogy of the Holy War. He comes to you very late in the game as a level 20 Pre-Promoted General with the worst overall growths of any second generation unit (and tied for worst in the whole game with Sylvia and Erinys). But with overall good base stats he can pull his weight if needed.

While he comes with very respectable base stats for an Armor/General (being statistically superior to Arden in everything but Strength, and in particular having high Skill and Speed for his class), he is held back considerably by crippling weaknesses. His very low Movement makes it essentially impossible for him to fill any role beyond defending castles. Other than Arion's multi-pronged assault at the end of Chapter 9, no castles really need a dedicated guard. His lack of Pursuit gives him poor overall offense, and it is not really worth it to give him the Pursuit Ring as he is unlikely to even see combat. He does have Adept to improve his combat capability, but he has a roughly 30% chance to activate it if he is wielding a Sword. He is unlikely to be killing any late game units, particularly considering the very next chapter (and the rest of the game) features many Mage-type units that will decimate Hannibal.

Hannibal is not necessarily awful, but in an army full of carefully bred war machines wielding Holy Weapons, Hannibal just does not come close to measuring up and you will likely have trouble finding any use for him. That being said, his joining chapter does feature one situation where he can come in handy: namely, when Arion calls upon a squadron of wyverns and attacks several castles. Hannibal's absurd defense, proficiency with javelins, Wing Clipper, and lack of utility in other parts of the battlefield makes him a decent guard.

Unlike Iuchar and Iucharba, Hannibal's army will not become Ally Units and will simply disappear upon his recruitment, including the General guarding Kapathogia Castle, Kanatz.

In Chapter 9, if Coirpre/Charlot speaks to Hannibal, he will be recruited into the army.

In Chapter 9, after Grutia Castle is captured, position Charlot adjacent to Hannibal to trigger a conversation. This conversation will essentially allow Charlot to obtain the Berserk.

In Chapter 9, Seliph may speak to Hannibal, but nothing will result of it.

In Chapter 9, if Hannibal speaks to Altena, she will gain three points of HP.

Hannibal is unable to fall in love with any of the other characters, as he is, in the words of a random villager, "married to Thracia".

"Then,
General Hannibal,
Helped him too, and they devoted themselves to the construction of the new country."

Hannibal is illustrated in the trading card game Fire Emblem Cipher with the following cards:

Hannibal was a general and tactician of ancient Carthage, and is considered one of greatest military commanders in history, despite his failure during the Second Punic War. 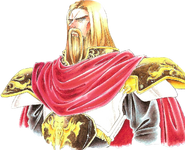 Official artwork of Hannibal from the Super Tactics Book.

A portrait of Hannibal from the Thracia 776 Illustrated Works.

Artwork of Hannibal in Fire Emblem 0 (Cipher) by Ippei Soeda.

Hannibal, as he appears in the Nea Fuyuki manga adaptation.

Hannibal, as he appears in the first series of the TCG as a Level 1 General.

Hannibal, as he appears in the second series of the TCG as a Level 10 General.

Hannibal as a General in Fire Emblem 0 (Cipher).

Hannibal's portrait in Genealogy of the Holy War.