Following the battle that ensues, as Corrin and Gunter prepare to return back to Nohr, Hans ambushes them, whereupon he succeeds in driving Gunter off the cliff into the yawning void of the Bottomless Canyon. He then attempts to kill Corrin in a similar vein, but fails to do so as they, enraged by Hans' betrayal, activates the Dragon Fang skill. As Corrin moves in to strike Hans, they furiously demand to know the reason behind his betrayal, Hans only reply that he was following Garon's orders. Before Corrin can ask why, they are pulled away and into the chasm by the haunted Ganglari. Hans promptly makes his escape, presumably back to Nohr to report the success of his mission to Garon.

Hans reappears in Chapter 13, where he joins the Corrin in their plans to a stop the rebellion uprising that has broken out in Cheve. The Nohrians come out victorious and the army has spared the lives of the enemy soldiers. Hans, along with his goons, starts killing not only the remaining wounded Hoshidan troops and Chevian knights, but also the Chevian civilians following the Corrin's defeat of Scarlet, having been ordered by Garon to do so. Corrin attempts to stop him, but Hans claims that he is just following Garon's orders and that he cannot listen to Corrin since Garon's word is law, before continuing his killing spree. According to Camilla, Hans also killed Scarlet in a particularly "gruesome manner" after she was defeated by Corrin.

In Chapter 14, Hans later gives Garon his report, crediting Corrin with most of the work he had done, much of their indignant outrage. After the Nohrians kills the band of Hoshidan soldiers that arrived to assassinate Garon, he orders Corrin to kill all the singers in Nestra. When Corrin protests, Leo manages to drag them out of the situation, while Garon orders Hans and Iago to kill them instead and they leave to begin their killing spree.

Hans later reemerges following the conclusion of the fierce defense put up by Yukimura in Chapter 22. Upon his entrance, he mercilessly slays a few of the Hoshidan prisoners alongside Iago, not including Yukimura, Sakura and her retainers Subaki and Hana. Although Xander and the others try to stop them from killing any more prisoners, they are halted by Garon, who threatens to execute them for treason if they continue in their protests.

Hans makes one final appearance in Chapter 26, where he, along with Iago and Garon's loyalists, attempts to kill Corrin after Garon assumes the throne of Hoshido and for Corrin letting Hinoka escape alive. The joint effort of these deceitful characters proves to be in vain, as the Nohrian royals turn against them since they can kill them without Garon to protect them any more. Corrin, working alongside their siblings and army, manages to kill Hans, Iago and all of Garon's loyalist, ending their tyranny and providing retribution to the innocent lives lost at the hands of Hans and Iago. Before his death, Hans is shocked and angered, complaining how he will not be rewarded for all his "hard" work.

In Chapter 14, following Xander's return to Castle Krackenberg after his return from Cyrkensia, Hans is observed to be conversing with Iago. Within this exchange, Hans asserts the impossibility of Xander being convinced to join the Corrin's cause, to which Iago disagrees and brings up the fact that Camilla had joined the Corrin's army to support his disagreement, resolutely maintaining a stance of suspicion against Xander. The two are unaware that Elise was eavesdropping on them, who then leaves to join Corrin.

Hans is a violent criminal who will go to any length, no matter how inhumane they may be, in order to realize his dream of attaining power. To this end, he relishes murder and bloodshed, a fact that is repeatedly proven through his involvement across the game's various routes. He cares little for his subordinates, willingly charging forward alongside them, but abandoning them the first instance he is outmatched. He always follows Garon's orders without remorse and is more concerned with his own self-preservation than the well-being of his comrades.

Hans has earned the dislike and distrust of the Nohrian royal siblings, particularly Xander, for his lack of humanity. Likewise, Hans detests them, stating that they are another obstacle in the way of obtaining glory and relishes the thought of killing them in order to do so. When Xander and the Nohrian royals turn against Iago, Hans is unfazed and remorselessly threatens to kill them, calling them "weak", showing he is loyal only to Garon, which leads to Hans getting his comeuppance for his shameless and disgraceful crimes.

“Bwahaha! Looks like I've done enough damage for the time being. Time to lay low and see how this all plays out...”
—Hans' Chapter 3 retreat quote.

“Let me relieve you of your head! Bwahaha!”
—Hans' pre-battle quote.

“I've waited a long time to wipe that smug look off your face. This is what you get for not bowing down to my might!”
—Hans' pre-battle quote.

“Bwahahaha! I hope you're all prepared to die! Actually...I don't care if you're ready or not. The more of you I kill, the better the promotion I'll get as a reward. Earl Hans... No... Duke Hans... Yes, that has a nice ring to it.”
—Hans' pre-battle quote.

Hans is illustrated in the trading card game Fire Emblem Cipher with the following cards: 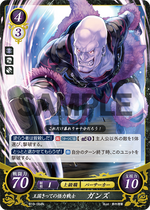