As the war continues to progress, Hans is later encountered Chapter 24 where he is promoted to commander. While passing through an underground passage under Elise's guidance, the Hoshidan army accidentally stumbles upon a training ground. Obscured by a statue, the army watch as Hans enters the grounds as Nohrian Heroes and Generals are engaged in training. One of the Generals later discovers the Hoshidan army, whereupon and Hans gleefully orders his troops to use them as practice targets. However, the soldiers are unable to kill them and angered by the incompetence of his soldiers, personally takes over and lands several devastating blows against the Corrin. Before he can land the killing strike, Lilith arrives and takes the blow for them, sending them into a fit of rage.

Hans reappears in Chapter 13, where he joins the Corrin in their plans to a stop the rebellion uprising that has broken out in Cheve. The Nohrians come out victorious and the army has spared the lives of the enemy soldiers. Hans, having been ordered by Garon to kill not only the remaining wounded Hoshidan troops and Chevian knights, but also the Chevian civilians following the Corrin's defeat of Scarlet. Corrin attempts to stop him, but Hans claims that he is just following Garon's orders and that he cannot listen to Corrin since Garon's word is the law, before continuing his killing spree. According to Camilla, Hans also killed Scarlet in a particularly "gruesome manner" after she was defeated by the Corrin.

In Chapter 14, Hans later gives Garon his report, crediting Corrin with most of the work he had done, much of their indignant outrage. After the Nohrians kills the band of Hoshidan soldiers that arrive to assassinate Garon, he orders Hans and Iago to kill all the singers in Nestra and they leave to fulfill it.

Hans makes one final appearance in Chapter 26, where he, along with Iago and Garon's loyalist, attempts to kill Corrin after Garon assumes the throne of Hoshido and for Corrin letting Hinoka escape alive. The joint effort of these deceitful characters proves to be in vain, as the Nohrian royals turn against them and since Garon cannot protect them any longer. Corrin, working alongside their siblings and army, manages to slay Hans, Iago and all of Garon's loyalist, ending their tyranny and avenging all the innocents they killed. Before his death, Hans is shocked and angered, complaining how he will not be rewarded for all his "hard" work.

In Chapter 14, following Xander's return to Castle Krackenberg after his return from Cyrkensia, Hans is observed to be conversing with Iago. Within this exchange, Hans asserts the impossibility of Xander being convinced to join the Corrin's cause, to which Iago disagrees. Iago then brings up the fact that Camilla had joined the Corrin's army to support his disagreement, resolutely maintaining a stance of suspicion against Xander. The two are unaware that Elise was eavesdropping on them and leaves to join Corrin.

Hans has earned the dislike and distrust of the Nohrian royal siblings, particularly Xander, for his lack of humanity. Likewise, Hans detests them, stating that they are another obstacle in the way of obtaining glory and relishes the thought of killing them in order to do so. When Xander and the Nohrian royals betray Iago, Hans remorseless threatens to kill them, calling them "weak", showing he is loyal only to Garon, which leads to Hans getting his well deserved fate for his disgraceful crimes. 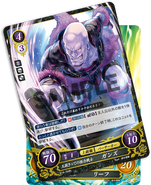