Sachika Misawa
[view]
“Why do I have to go? No matter what we do, we're all just gonna die in the end anyway.”

Hapi is a character from Fire Emblem: Three Houses. She is a inhabitant of Abyss, and a member of the Ashen Wolves. Currently she's the only known bearer of the Crest of Timotheos. In Cindered Shadows or Abyss mode, Hapi is a main protagonist, alongside the other members of the Ashen Wolves.

Hapi is the name of two Ancient Egyptian gods; one of the sons of Horus tasked with protecting the lungs of the deceased, and a river god associated the flooding of the Nile. 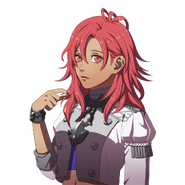