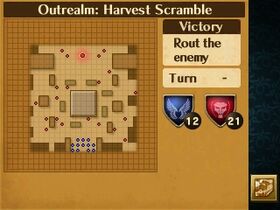 Chapter script
[view]
“The Outrealm is bustling as the annual harvest festival enters full swing. Chrom steps up to drive away a pack of Revenants who suddenly appeared to wreck the festival.”
—Opening Narration

Harvest Scramble (Harvest of Bonds in the Japanese version) is Xenologue 16 of Fire Emblem Awakening. This chapter takes place in the Outrealms.

This map features a lot of conversations between same-gendered characters, ranging from conversations about the festival to things more unexpected. This map is recommended for players who are fond of their characters and, because of the low difficulty level, is also ideal for players who have just started. Every enemy on the map has 50 luck as well as the skill Miracle. Be wary of the Revenants that pack Counter in their arsenal.

Lissa's unique portrait in the Xenologue, where she is seen wearing a red party hat.

Vincent's unique portrait in the Xenologue, where he is seen wearing a blue party hat. 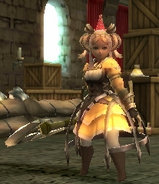