Havetti is a boss character from Fire Emblem: Path of Radiance. He is a pirate and the boss of Chapter 3. On the second playthrough or above, he will be carrying the Thief Band.

Havetti and his crew of pirates had settled their ship in the port of Talma. During their stay, the pirates were intimidating the villagers into giving them money and supplies, so the Greil Mercenaries were hired to drive them out.

During the battle, Marcia the Pegasus Knight comes to confirm if Havetti and his crew know the whereabout of her brother. Havetti says he was onboard for a while and asks a nameless crewmate if he knows what happened to her brother. The pirate says that Makalov gambled with them and tried to cheat the crew when he lost, thus he was thrown overboard.

Calming down his subordinate, Havetti says they are willing to have Marcia work off her brother's gambling debt, but she angrily refuses, engaging the pirates in combat. Ike can potentially help Marcia escape the battlefield.

When confronted on the battlefield by the Greil Mercenaries, Havetti is offered the opportunity to return the supplies and leave town but the pirate turned it down and thus was felled in battle, presumably dead.

He appears again on the Fire Emblem World website in the Fire Emblem Awakening Background. He, alongside Anna, is one of the co-hosts of the Capture Section, where they give details about the chapters from that game.

Havetti and his crewmate cameo in Marcia's cipher card. 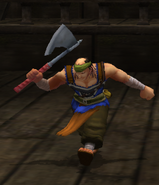