Jamieson Price
[view]
“But I have no regrets. I have served my master, married a wife, and fathered a child. I was also blessed with friends like you and Lord Pent. All that remains is to fulfill my destiny.”
—Hawkeye to Louise in a support conversation

Hawkeye (Tronk in the Italian version) is a playable character in Fire Emblem: The Blazing Blade. He is gruff and quiet, but is extremely loyal to Pent and Louise.

Hawkeye's history remained relatively unknown, although it is speculated that, ever since his childhood, he was trained to be protector of the Nabata Desert, as he did later to his daughter Igrene even after the death of his wife. During his time as Guardian of the Desert, he met the Archsage Athos, as well as Pent and Louise. Eventually, he would meet Eliwood, Hector, and their group, traversing the desert to find the "Living Legend". He would join them after speaking to either Eliwood and Hector and traveled with them for the rest of their quest.

It is Hawkeye who is in possession of the first Heaven Seal, having received it from Athos, but since he is unsure of what to do with it, he gives it to Pent for safe keeping. Hawkeye does not appear in any cutscenes after this point.

After the war with Nergal, he returns to his desert, while he remains its guardian for the rest of his life, he focuses the autumn of his life on his daughter, Igrene who will inherit the desert and all its secrets when he dies.

Since Igrene is the Guardian during the War on Bern, it is more than likely that Hawkeye is deceased at this point in time.

Description: The protector of Nabata. A mysterious air surrounds him.

Hawkeye is a great unit who arrives midway through the game. His combination of high HP, Strength, Defense and decent Resistance makes him great for combating multiple units on enemy phase, especially due to his status as an axe unit with Hand Axe access. Hawkeye is one of the tankiest units in the game uninvested, with enemies often struggling to kill him in under four or five hits. His high axe rank enables him to use powerful axes such as the Killer Axe, Silver Axe, and Brave Axe at base. As a Berserker, he boasts a boosted critical rate, which can enable him to outright one-shot opponents with a bit of luck, and the ability to cross water and mountains, which can aid the player on terrain-heavy maps like Night of Farewells or Unfulfilled Heart. Hawkeye's only weak point combat-wise is his somewhat mediocre base Speed; while he is fast enough to double slower enemies or even average-speed enemies (especially as enemies in Blazing Blade have a habit of weighing themselves down), he likely won't double speedier enemies, like Mercenaries, Wyvern Riders, or promoted enemies. A Speedwing can bandage the problem somewhat, but he still usually isn't fast enough to double anything promoted aside from a General or a badly weighed-down magic unit, so it's usually not worth the investment. Additionally, his high Constitution limits being Rescued by any promoted mounted units, with the exception of Rath, although that shouldn't be too much of an issue.

Desert Guardian
Guardian of the Nabata Desert and Arcadia, where dragons and humans live in harmony. Appears in Fire Emblem: The Blazing Blade.

Note: This death quote is unlocked by clearing the game 8 times, or transferring save data from The Binding Blade in the Japanese version.

“...I, too, will join you in this final glory.”
—Final Chapter Quote

Hawkeye returned to Nabata and lived peacefully in Arcadia with his daughter, whom he trains to be guardian of the desert.

Hawkeye is illustrated in the trading card game Fire Emblem Cipher with the following cards: 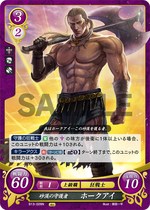