Benjamin Diskin
[view]
“I am no child, fool. My name is Hayato. You should thank the gods you have the chance to face one as talented as I am.”
—Hayato in Conquest Chapter 20

Hayato is a playable character in Fire Emblem Fates on the Birthright and Revelation routes. An orphan from the Wind Tribe who was raised by their chief Fuga, Hayato is recognized as a magical prodigy. If he achieves an S support, Hayato will bear a daughter named Rhajat with his spouse.

Hayato was born into the Wind Tribe but was orphaned when his parents passed away during his childhood. Out of respect to the memory of Hayato's parents, their old friend Fuga thereafter decided to adopt him and raise him as his own child.

Hayato makes his first appearance following the end of Chapter 8, where he is introduced to Corrin's army after they successfully overcome Fuga's challenge in the Wind Tribe Village. Fuga urges Corrin to recruit Hayato into their ranks, describing him as a skilled Diviner who is in need of real-world experience. Although initially hesitant due to mistaking Hayato for an ordinary child, Corrin is later convinced otherwise by Fuga's persuasions. Before Hayato departs with Corrin, Fuga urges Corrin to take good care of him, prompting him to, in a fit of annoyance, remind him that he is no longer a child.

Hayato subsequently aids Corrin's effort to put an end to the age-old conflict shared between Hoshido and Nohr.

Hayato makes his only appearance in Chapter 20, where he presents himself as one of the foes that Corrin's army will come to face in Fuga's friendly challenge. Although initially pompous and overconfident in his capabilities, Hayato is, alongside the rest of his allies, defeated by Corrin's army. Shortly before Fuga permits Corrin's army to depart from the village, Hayato issues forth a challenge to Corrin in hopes of eventually having a rematch with them.

Hayato makes his first appearance in Chapter 9, where he is one of the foes faced by Corrin's army during Fuga's challenge in the Wind Tribe Village. Despite the effort staged by Hayato and his allies, they are eventually defeated, and the Wind Tribe is thereafter convinced of the sincerity of Corrin's intentions. Fuga then offers to provide aid to Corrin's army, only for Hayato to step forward of his own accord to volunteer himself.

Much like Charlotte and Benny, defeating Hayato is not necessary in order to complete this chapter, though unlike the other two, doing so will not affect your ability to recruit him afterwards.

In Paralogue 14, Hayato, accompanied by Subaki enters a cemetery in the Deeprealms to reunite with his daughter Rhajat. Sensing something is amiss due to the dark, forbidding appearance of the surroundings, Hayato hurries to where Rhajat is located. Upon entry into Rhajat's home grounds, Hayato and Subaki are greeted by the sight of hordes of Faceless spawning from a number of bogs. Hayato then reveals Rhajat's strange fascination with the dark arts, deriving amusement from dabbling with them. Although initially unconvinced by this revelation, Subaki quickly changes his mind when he hears Rhajat cackling in pride and referring to the Faceless as her children. Hayato thereafter leads Corrin's army into battle to purge the land of the Faceless spawned by his daughter. Following the conclusion of the battle, Hayato chastises Rhajat for her recklessness before insisting on taking charge of her magical education by compelling her to accompany him out of the Deeprealms and join Corrin's army.

Owing to him being recognized as the most powerful Diviner in the Wind Tribe, Hayato thus desperately seeks to live up to his title, adopting a stiff, formal style of speech and attempting to conceal what he considers childish. As a result of this, he often comes across as being rather condescending and rude in his treatment of others, a fact that is reflected throughout a good number of supports that he shares with other characters. Hayato's snobbish attitude is, however, a mask for the adolescent form that continues to live within him, one that he accidentally makes known to the world from time to time. It is through the emergence of these childish tendencies that more dimensions to his personality can be observed.

For one, Hayato possesses an innate curiosity about the world around him, easily fascinated by things that are unfamiliar to him. His supports with Azura best exemplify this, where he, in a fit of excitement, informs her of his admiration for the vastness of the world outside of the Wind Tribe. He is also known to possess a sweet tooth, one that he deems to be disgraceful; through his supports with Sakura, he initially refuses her offer to share her mochi with him, only accepting when she comes up with the idea of pretending that he is helping her to finish them if they're asked about it.

Hayato has also been revealed to be an insecure person, possessing quite a few phobias that include the dark and the supernatural, one that are known to reduce him to tears due to him not being able to maintain a stable frame of mind when confronted with both. His supports with Azama is an example of this fact, where a tale that Azama shares of a ghost living in a closet is perceived to be terrifying enough to cause Hayato to break out into a peal of uncontrollable sobs. Hayato also detests appearing weak in front of others and failing to achieve success in his spellcasting. As shown in a Private Quarters conversation, Hayato is afraid of the dark.

Hayato is fairly skilled as an apothecary, having numerous rare herbs and can also turn them into potions. His supports with Orochi show that he is more potent in making a healing potion and presumably a salve for tooth rot, though Orochi surpasses him in cold medicine.

Hayato is said to be the one who drinks the most milk in the army.

Hayato is the second Diviner recruited in Birthright and the first in Revelation. Hayato is a rather balanced unit stat-wise; possessing moderate Magic and Skill, he is also blessed with solid HP, Speed and Defense. He is also fairly proficient in terms of Strength, a fact that does not restrict him from performing well in physical-oriented classes when reclassed. Hayato's personal skill Pride increases his damage by 4 if his current level is lower than or equal to his opponents, giving him some additional potency during his initial training. The skill will lose its potency as the player progresses through the game, as, unlike player units, enemies cap off their levels at 20, meaning that if using Eternal Seals, Hayato completely removes the usefulness of his skill, save for My Castle battles.

Hayato's base class as a Diviner provides him with Magic +2, a skill that gives him a small boost to his attack power, and Future Sight, a skill that can advance his experience gains.

As an Onmyoji, Hayato will focus on capitalizing on his Magic, sacrificing some Strength and Luck in order to improve his Magic and Resistance. Rally Magic is one of the skills that he stands to learn, and will prove useful to any other magic-wielding units by boosting the power of their attacks. Tomefaire is the other skill that is learnt, which will complement Hayato's natural proficiency in Tomes and Scrolls by increasing his damage output when he has them equipped. Hayato also gains the ability to use Staves and Rods, allowing him to play a support role alongside an offensive one.

As a Basara, Hayato's oddly decent Strength growth is brought to light as he gains the ability to arm Lances and Naginata. To compensate for the rise in HP, Strength and Luck that he gains in this class, Hayato sacrifices small portions of Magic, Speed and Resistance. However, it can become quite difficult for Hayato to defeat enemies with Lances and Naginata if they are not weakened, as many enemies in Birthright either wield Axes and Clubs or are sturdy enough to withstand physical attacks channeled through his moderate Strength. This is not too much the case in Revelation, with the wider spread of enemy variety, although given Hayato's low base Strength, it may take quite a bit of effort on the player's part before he can effectively fell enemies with physical weapons. Rend Heaven is one of the skills that Hayato stands to learn, and is a powerful offensive skill that adds either half of the enemy's Strength or Magic stat to Hayato's own depending on the offensive nature of the weapon he is using, amplifying the strength of his blows. Quixotic is the other skill learnt, and is one that is considered to be a double-edged sword due to it boosting the skill activation and hit rates of not just Hayato, but also his foes, by 15% and 30% respectively. This skill may have some use to Hayato thanks to his average Skill, but he will be presented with much risk when facing against enemies with offensive skills.

Hayato's secondary class is the Oni Savage, entailing the Oni Chieftain and Blacksmith promotions. Thanks to his semi-good Strength growth, Hayato can be safely reclassed into any of these classes, although he will inevitably have a shaky start due to the E rank in Axe mastery he will be locked to when first reclassed. Oddly enough, Hayato actually rivals Rinkah, the only character in the game who starts out as an Oni Savage; compared to her, Hayato actually possesses more HP, Strength, Magic and Luck, alongside tying with her in Speed and Resistance. As an Oni Savage, Seal Resistance is one of the skills that Hayato learns, and can prove very useful to him if he is reverted to being an Onmyoji or Basara, lowering the Resistance of enemies he engages and thereafter allowing him to better damage them.

As an Oni Chieftain, Hayato will excel in Magic due to his natural access to magic-based classes, but this is compensated for by his lower Defense. Given that Hayato's Skill growth rate as an Oni Chieftain sits at 30%, it is recommended that he bring over the Quixotic skill from the Basara class if he intends to remain as an Oni Chieftain or risk being unable to consistently activate his offensive skills. Death Blow is an extremely useful skill that he stands to learn in this class, as it increases his critical hit rate immensely when initiating combat. This fact is especially emphasized upon when Hayato is outfitted with high critical rate weapons like Mjölnir, Dragon Spirit or Malevolent Text, allowing him to quickly stack his ability to score critical hits. Counter is the other skill that he learns, and is particularly useful given that his low Defense, allowing him to punish physical-based enemies who try to attack him.

As a Blacksmith, Hayato sacrifices his magical abilities for more utility. Salvage Blow is one of the skills learnt, and can be used to acquire Hoshidan iron weapons. Lancebreaker is a more useful skill that he can learn, allowing him to alleviate the threat that Lances and Naginata possess against the Tomes and Scrolls that he is naturally proficient in arming.

Hayato is illustrated in the trading card game Fire Emblem Cipher with the following cards: 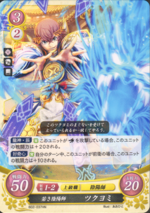 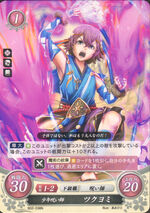 Hayato (隼人) means Falcon Men and was the name of a clan in ancient Japan. The name likely alludes to him being in the Wind Tribe.

Tsukuyomi (月読) is the name of the Japanese god of the moon who was born from Izanagi along with his two siblings, Amaterasu and Susano'o, after washing his face after his trip to Yomi to rescue his wife Izanami. Tsukuyomi was born from Izanagi's right eye. Tsukuyomi can have multiple meanings; "Moon Reader" and "Moonlit Night Viewing" depending on the characters used.