Hayato was born into the Wind Clan, but was orphaned and later raised by Fuga, the Wind Clan Chief. Despite his young age, he’s a talented spellcaster. If he achieves an S-Support, he will have a daughter named Rhajat. He drinks the most amount of milk in the army and has a secret liking for sweets. His birthday is September 19.

Hayato overbearingly tries to act like a grown up. However, he retains child-like weaknesses such as being afraid of the dark and being sensitive about his height. He is ignorant of the ways of the world and cries when his spells fail.

◾ Note: Growth Rates as an Onmyoji

Hayato (隼人) means Falcon Men and was the name of a clan in ancient Japan. The name likely alludes to him being in the Wind Clan.

Hayato as he appears in Fire Emblem 0 (Cipher). 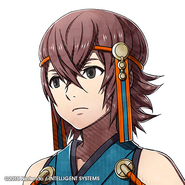 Hayato's model for My Room.
Add a photo to this gallery