Nathaniel Lane
[view]
“I’m a soldier, but… I’m trying to be human, too.”
—Heath when recruited by either Eliwood or Hector

Heath is a playable character from Fire Emblem: The Blazing Blade. He is a proud Wyvern Rider of Bern who is honorable with a strong sense of justice and morality.

Heath once served Bern as a Wyvern Rider under the command of Vaida. Among his wingmates were Isaac, Lachius, and Belminade, none of whom ever appear in the story. As he reveals to Kent in a B level support, his unit was sent down to suppress an uprising. What they found, however, was a group of unarmed peasants who fled at their approach; a general had drummed up a false rebellion in order to further his military career. When ordered to kill the peasants, his unit refused and tried to stop other Bern forces from harming them. For this treason, they were branded traitors and to be hanged. The general responsible for the false rebellion also spread a lie that the unit had killed innocents, while the opposite was true. Vaida served as a decoy as the rest of the unit fled to cross the border, but was seriously injured in the resulting battle. However, his former wingmates, save Vaida, are now all dead because of their desertion from Bern.

After fleeing Bern, he falls in with Eubans' mercenary group to make a living. In Hector's Story, he appears with a division of it along with Sealen during Chapter 15 and reports that he secured a route of retreat as Eubans ordered. He then leaves before the battle begins. He later appears when Eubans and the rest of the mercenaries attack Eliwood and Hector at a fort on Ostia's border. He will surrender to any of the lords if they speak to him, and can thus be recruited. If Ninian speaks to him, he asks her to send a message to the lords, and joins their army. If he is sent to fight Eubans, his former commander, they have a special pre-battle conversation.

His wyvern is named Hyperion.

He voluntarily defects to Eliwood's side after the leader of his mercenary squad orders him to kill women and children — something that compromised his sense of personal honor. This indicates his high respect for chivalry, much as his refusal to kill innocents in Bern does. When he converses with Sealen during Talons Alight, he tells him to "watch himself" and ensure that he is not hurt, despite their having no close relationship, indicating that he cares deeply about those who he fights with and does not want to see his allies hurt.

While he claims in his B level support with Kent: "Bern is nothing to me... I have no love for a country that slaughters its own," in his final chapter quote he states: "For Bern, land of my birth... May I return to it soon!" indicating that he misses his country. His A level support with Vaida best compromises these viewpoints as he expresses that he wants to protect Prince Zephiel, who he believes will be a just ruler. This would hopefully end the abuses of the people that Bern saw under King Desmond and make Bern a country that Heath can serve with pride.

He can develop feelings with Priscilla, but when he learns her position as the adopted daughter of Count Caerleon of Etruria, he has no choice but to leave her, since he is a deserter from Bern. Alternatively, he can renew his loyalty to Vaida and depart with her to Bern to aid Prince Zephiel.

Despite joining underleveled midway through the game when most of the player's army is already hitting their stride, Heath has a plethora of perks.

He gets Hector Hard Mode bonuses. While these don't do much to offset his slow start, they give him a chance to stand out thanks to his performance being comparable to Normal Mode when most other characters perform worse than on Normal Mode.

His immediate selling point is his class. As a Wyvern Rider, he can traverse all terrain and potentially while ferrying another less mobile unit. Statistically, his high HP, Strength, and Defense are key selling points. Despite his starting level of 7, it's unlikely that they'll be lower than what Florina and Fiora would have at his join time. His 16 Aid lets him rescue any unit in the game besides Merlinus. His growth rates are also very good. 50% Strength and 45% Speed are both very solid given the relatively generous doubling and 2HKO thresholds in FE7. 30% Defense is also above average and 80% HP is nothing to scoff at. His Luck and Resistance are low but should not hold him back in any meaningful way. He's a decent candidate for the Afa's Drops given the number of levels he has to gain, but the item itself is relatively inconsequential.

His base speed of 9 is mediocre, but bear in mind that base level Marcus is capable of doubling some enemies with his 11 speed. Once his growth starts kicking in, Heath will start doubling and won't stop. His Resistance is also pretty bad, but spamming Barrier can patch this up, and the player is likely to have the staff handy since it builds staff rank so easily. Bows are a minor annoyance, but it's only a 2x multiplier in FE7. He's a good candidate for the Delphi Shield once it's obtained.

There are a few ways for Heath to get out of his slow start. He can pick up kills in his join chapter (possibly two in one turn with the help of Ninian). Since he's a flier, he's a useful unit for the desert and can definitely pick up a few kills there (including the finishing blow on the bosses with his Axereaver). He's not great in Genesis due to the fact that it's mostly magic enemies. He performs well in either version of Four-Fanged Offense, and he can do well against Crazed Beast Cavaliers. This means that he should be ready to promote by Unfulfilled Heart.

Once Heath promotes, he'll be a very solid unit. In addition to his eight movement and flight, his combat will see improvements thanks to his +2 Speed. His decent con of 10 will let him use most weapons with negligible or no speed loss, with Javelins in particular coming to mind. Having only 10 con lets him rescue a promoted Hector, which is a critical trait to have. Unfortunately, he doesn't get a Strength or Defense boost, but he gets +4 HP, which is nice for his overall durability. He also gets swords, which aren't particularly helpful but can come in handy occasionally. His combat is likely to end up being significantly better than the pegasus sisters, who are more frail and lose quite a bit of speed from Javelins. He shouldn't have to compete for a promotion item, since there are two previously obtained Elysian Whips and a third obtained soon after his join time. If the player uses all three on the pegasus sisters, though, they can use an Earth Seal on him. He should wait until around Level 15 so he can improve his Strength, Speed, and possibly Defense before promoting. Once the Boots are obtained, Heath is a decent candidate for them as giving him 10 Movement will only improve his strong points.

Overall, Heath is a bit of an investment, but he's definitely worth it. As a flier, he has mobility and utility that most units lack, and as a Wyvern Rider, his combat and durability are much better than other fliers.

Wandering Knight
A young man troubled by the contrast between his knightly ideal and reality. Forced to leave his homeland, Bern, before becoming a mercenary. Appears in Fire Emblem: The Blazing Blade.

Eubans: You are a traitor, Heath. You know nothing of honor!
Heath: I... No. I simply must live a life of which I am not ashamed. Commander Eubans... It is not too late. Give the order to stop. If you do...
Eubans: Ha ha... You're so naive! You're no knight. And you're no mercenary, either, you dolt! You know nothing! You can carry your precious morals straight to the grave!

Vaida: You!
Heath: Commander? Commander Vaida! It's me, Heath!!!
Vaida: The deserter? By what right are you back in Bern?
Heath: You first! Why are you working with the Black Fang? We swore to serve only House Bern...
Vaida: I don't see anyone from the royal family around, do you?
Heath: Commander Vaida...
Vaida: Prepare yourself, Heath!! You were a novice when you reneged on your vows. Have you improved much since you turned your coat?
Heath: Commander! I... I do not want to fight you.
Vaida: No more talk!

“For Bern, land of my birth... May I return to it soon!”
—Final Chapter Quote

Heath - Wandering Knight
Heath moved to Ilia and became a mercenary knight of some fame. He fought not for country, but for people in need.

Heath and Vaida
After paying her debt to Eliwood, Vaida returned to Bern. Though no longer an official knight, she sought to aid the prince from the shadows. Heath followed her home to Bern to support her.

Heath and Priscilla
They fell in love amidst conflict, but Priscilla was a noble and Heath was a deserter from Bern. Their differences were too great. When they parted, Heath told a weeping Priscilla he would someday return.

Heath is illustrated in the trading card game Fire Emblem Cipher with the following cards: 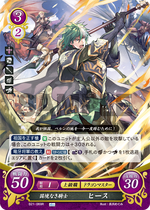 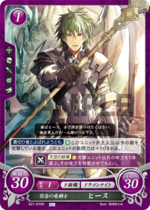 A 'heath' refers to either a wild, uncultivated field or moor, or the shrubs and heather commonly found on a heath.

Hyperion is the name of the Greek sun titan, the rulers of the world before the rise of the gods, and also the eighth moon of Saturn.