Rogue
[view]
“Don't worry about it. I'm the type that likes to help nice country girls like you.”
—Heather, in a conversation with Nephenee.

Heather is a playable character from Fire Emblem: Radiant Dawn. She is a wandering rogue who scours the countryside villages of Crimea for gold to pay for her sickly mother's medicine.

Heather is introduced when she arrives in the village of Ohma during a battle. Around this time, Brom and Nephenee enlist her aid in stopping an insurrection in Ohma. For the duration of Ludveck's rebellion, she assists Lucia and Elincia in their efforts to stop it. After the war concludes, Heather returns to her home to care for her ill mother and swears to put a stop to her stealing ways, although she always seems to have an ample supply of gold.

Heather is a cunning young woman who loves to trick men into giving gold and other possessions to her. It is implied that she is the rogue who tricked Gatrie into giving gold to her during the events of Fire Emblem: Path of Radiance, although this is only mentioned in one of the support conversations between him and Shinon.

She flirts with the other female characters, especially Nephenee, and seems to dislike men. In a quote that was removed from the North American and PAL versions of Radiant Dawn, she says that her motive for joining the Crimean Army was to "meet all the pretty girls." She enjoys seeing Elincia, whom she describes as "glorious", and voluntarily assists Lucia, whom she deems an "amazingly stupendously great" girl. She also willingly tricks "some dupe who thinks she's cute" into giving her food, which she later uses to feed Ilyana.

* Only if Knife mastery level is at B or lower.

Heather is the second Rogue of the game. Unlike Sothe, Heather is built for Speed and Luck. Heather can easily dodge most if not all attacks including magic. Her Skill growth is a nice touch allowing her to hit almost all enemies. Her Strength is average to say the least, although this is to be expected of a Rogue. She can be used as a diversion unit by removing all weapons from her but in general, it yields better results to train her and equip her well, since she can weaken most enemies this way. This allows her to gain more EXP for defeated ones and helps training other units since surviving enemies will most likely die with another hit or two. Also, when she is promoted to a Whisper, she will kill enemies more often and may become a very deadly unit with the addition of the Bane skill.

Unlike Sothe, the chapters where Heather is present have little to steal (Robbing the Senators in River Crossing being the most prominent, but is only needed if desiring the Bonus Experience for leaving them alive), few locks (again, only present in River Crossing, where the locks may be broken by any unit) to open, and fewer/less valuable Hidden Treasure (which may still be obtained by other units), giving her less utility value. Although she does join around the same time the player obtains the Disarm skill allowing her to steal weapons enemies have equipped.

For endgame Heather is possibly the worst character to bring in, as her 28 strength cap, if she can even reach it, and her lack of other abilities make her especially impotent. Additionally the Baselard is the only especially strong knife in the game, which Heather will need to do any real damage, and there is only one of it, while Volke at base is a completely superior combat unit to a completely capped Heather and thus it will never be optimal to have her in the Tower using the Baselard instead of Volke.

Statwise, there is little difference between the two Rogues/potential Whispers, Sothe and Heather, if trained Heather can be as good a unit as Sothe, however due to being forced to bring Sothe into every battle you have him for (including the Endgame) Sothe is easier to use, unless two Whispers are desired for some reason, but this is unecessary in most cases.

Heather has a fire affinity which gives an attack and accuracy boost, she benefits little off of the accuracy boost but the attack boost is helpful as she needs all the help she can get for her damage output. Since Heather is not a unit you'll want near the frontlines it can be hard if not impractical to have her stay in support range of your other units and supports will do nothing to help her perform thieving duties. If the player wants to actively use Heather and have her see combat, then an earth affinity is by far most desirable, as she'll need the massive avoid boost to maximize her survival and with it she can become near-unhittable, while no other affinity will provide close to that benefit for her. Ike and Oscar are the only units on the GMs with earth until Tanith joins in 3-11, so they are the ideal support partners for her, and both will benefit off the attack + accuracy boost. Since Oscar is a mounted unit that Heather will have a hard time keeping up with, while Ike is an infantry unit with similar movement, Ike will be the better support partner.

Alluring Rogue (魅惑の女盗賊)
Heather returned home to care for her mother, swearing off her roguish ways. Yet somehow, she always had money.

Heather is illustrated in the trading card game Fire Emblem Cipher with the following cards: 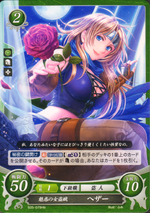 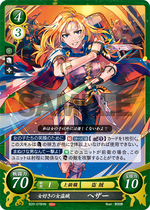 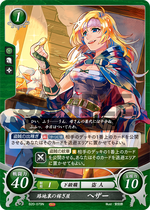