Chief of the Gritnea Tower

Sage
[view]
“This is not good... They're closing in. There are not enough Feral Ones. Someone! Anyone? Haaaalp! Go find Master Izuka at once!”
—Heddwyn

Heddwyn is a general of Daein and is the chief of the guards of Gritnea Tower, where Feral Ones are manufactured and Leanne is held prisoner. He wanted to apply to the capital for reinforcements, but Izuka escaped before then.

Heddwyn was placed in charge of Gritnea Tower while Izuka prepares an escape route for himself, and leaving Heddwyn to take command on his own. He and his mages engage the Crimean Liberation Army, along with many Feral Ones after the destruction of Nados Castle, but they are eventually defeated and he falls in battle.

Serving a small role in a larger plot, Heddwyn's personality is largely undeveloped. Several aspects may still be gleaned nonetheless. Heddwyn displays a cowardly nature who proceeds his situations with extreme caution. He is unable to tell the difference between a Feral One of his own or a Laguz in Ike's army, and will strike them regardless for his own safety. Much of this is shown in his battle conversations with many units in Ike's army, where he's driven to scream in fear in most cases.

Interestingly when attacking Tauroneo, he is relieved at first believing he was sent as a reinforcement. However his statement is disproved otherwise.

The usual strategy to defeat him is to get a Wind Mage in position to strike before he switches to the Rexbolt, as he has five shots at using Bolting before he does so. The trick is to bring in both the wind mage and a strong physical unit who needs experience both within two squares and, if you successfully kill him, you have a Rexbolt in perfect condition.

Heddwyn: This is not good... They're closing in. There are not enough Feral Ones. Someone! Anyone? Haaaalp! Go find Master Izuka at once!

Heddwyn: That one... He has the look of a commander. If I can only hit him... Well, here goes nothing!

Heddwyn: E-Ena? It can't be... You were supposed to be executed!

Heddwyn: None of the Feral Ones is that color. Which means it's an enemy! Yaaaaaa!

Heddywn: That's a Feral One, isn't it? They all look alike to me... Eh? Wh-why is it coming this way? Aaah! I don't like this at all! I think I'll destroy it just to be safe.

Heddywn: Reinforcements at last. Wait could that be?

Heddwyn: Is that a Feral One? Or is it an enemy...? I can't tell the difference! I'll attack it just in case. 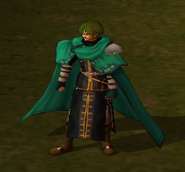