Barbara Goodson
[view]
“I am Hel. I rule over the dead. Those who are unworthy of a greater reward enter my dark realm. King Surtr, Ruler of Flame...your power is now mine.”
—Hel to Surtr in Xenologue 4

Hel is the main antagonist of Book III from Fire Emblem Heroes. She is the queen of Hel and the mother of Eir.

Hel is the ruler of the land of the dead that shares her name. In Xenologue 4, Hel greets Surtr after his ultimate demise and he finds himself in her realm. She then tells Surtr that he must resign himself to fate, for he cannot best death. Surtr states that the Order of Heroes might oppose death, but Hel responded back that her next task is to kill the members of the Order.

Hel's armies begin attacking Askr, and Hel sends her daughter, Eir, to infiltrate the Order of Heroes, gain their trust, and kill them on her command.

In Chapter 3, according to King Gustav, Hel fought him in a battle, only for Gustav to escape after she gave him a scar on his face. Then, Hel confronts the Order of Heroes and is defeated. However, she quickly recovers and curses Alfonse, stating that he will die in nine days and that he cannot escape his fate. Gustav indicates that Hel took his own father's life with the same curse.

At the end of Chapter 4, the countdown ends and Hel arrives to take Alfonse's life. However just before she can succeed, Gustav arrives at the last minute and takes the fatal blow meant for his son, fulfilling the curse and saving Alfonse at the cost of his own life.

In the middle of Chapter 6, Hel appears once more, and attempts to curse Alfonse a second time following the battle. However, following Alfonse's declaration that he will find a way to defeat Hel before the 9 days were up, she rescinded her curse, and vowed to make him suffer in ways he couldn't imagine. She appears before Eir after this, once again informing Eir that she will betray the Order once she gives the order. Eir doesn't wish to do this, stating that she dreams of a time when Hel smiled at her. Hel disregards this, saying Eir will follow her orders no matter what.

In Chapter 13, Hel gives her order to Eir, to which Eir reluctantly complies. After she seemly completes the task by killing Kiran, Hel reveals that Eir is not really her daughter. In truth Eir came from a world of dragons when Hel kidnapped her and altered her memories just so she can obtain more power. However right she's about to kill her it's revealed that Kiran somehow survived, the Order of Heroes tricked her and she retreats to her castle. After a lengthily final battle, Hel attempts to escape, but Veronica uses Angrbooa's Heart and performs the Heart's Rite, and then Kiran dealt the finishing blow to Hel with their two Breidabliks, completely killing her. Before she expires, Eir comforts her and says that although she was not her daughter, the love she felt was real.

Death Sovereign
Sovereign of Hel, the realm of the dead. Her power increases as the ranks of the dead grow. She aims for all the living to enter her realm.

In Norse Mythology, Hel is the daughter of Loki and is the ruler of the land of the dishonored dead, which is named after her and occasionally called "Helheim". 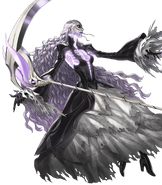 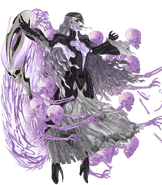 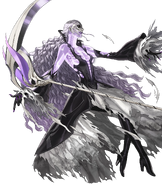