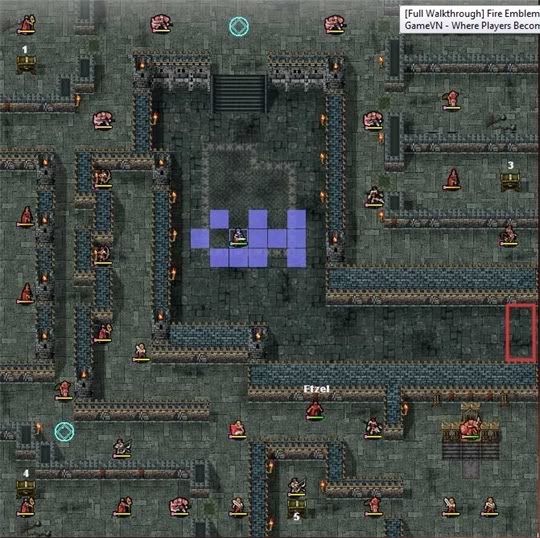 Etzel (if he survives this chapter)

Chapter script
[view]
“At long last, Altea was free again. Marth took the League to Helena Castle in the north, an old fortress and key supply point during Doluna and Grust's occupation. There he meant to seize the last of the enemy's gold and provisions but Grust would not give up the castle without a fight...”
—Opening Narration

Helena Castle (マクロニソスの城 makuronisosu no shiro, Castle of Makronisos in Japanese, or Prisoner of Helena in the European version) is Chapter 17x of the game Fire Emblem: Shadow Dragon. To gain access to this chapter, finish Chapter 17 with 15 units or fewer alive.

Etzel appears towards the south after the start of Turn 1 of the Enemy Phase, but only if the south-eastern room is still closed. Just ignore him, and he'll join at the end of the chapter (he does not move, so he is easy to avoid). However if you opened the south-eastern room during Turn 1, Etzel won't appear and you won't be able to recruit him.

Three Paladins will appear from the red area (see the map above) during Turns 9, 13 and 17 of the Enemy Phase. Two have Javelins , while one has a Killer Lance.

There are 5 locked rooms in this map, so bringing a thief might be a good idea. Also, the boss room will automatically open as soon as you enter the aisle where Etzel is. Shown below are the contents of each room:

Makronisos is an island in the Aegean Sea. In ancient times, it was known as Helena.