Hero
[view]
“Sigh. How did you find yourselves in here? I'm afraid I can't let you go.”
—Henning

Henning (ヘニング Henning, also known as Hening) is the boss of Chapter 8x: The Blazing Sword in Fire Emblem: The Binding Blade, where Roy and his army enters to get the Divine Sword, Durandal. Henning is there with a bandit gang to prevent Roy from getting Durandal, which he had found before Roy's arrival. He excels in Speed, and has 30% more avoid thanks to his throne, making him easily one of the hardest bosses to kill in the game.

“Ah, blast... I knew this would happen...”
—Henning's death quote in The Binding Blade.

Henning is often a surname used in Germany and Scandanavia. 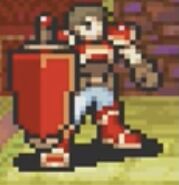