Pegasus Knight
[view]
“You think I'm stupid!? The Balmung is not some stupid shield! And Prince Shannan is more handsome than you could ever hope to be!”
—Hermina to a Shannan impersonator.

Hermina is a character from Fire Emblem: Genealogy of the Holy War. She is the substitute character for Fee if Erinys was not paired up. She is the sister of Hawk, and is supposedly a "fangirl" of the deceased Erinys and Sigurd, even going so far as to name her pegasus after Annand, prompting her to join the Silessean Pegasus Squad. Her portrait appears as unused data in Fire Emblem: Thracia 776.

She can talk to a fake Shannan in Chapter 9 if she visits a northwest village, and she will gain three defense points (Note: This conversation can also be triggered by Jeanne).

Hermina is depicted as being plucky, carefree and somewhat idealistic with her dreams of being a renowned pegasus knight and joining Seliph's rebel army. She is optimistic and positive, much like the character she replaces.

While Hermina is able to hold well on her own, the character she replaces, Fee, will always hold distinct advantages over her. Fee will always possess the Pursuit skill, while the only skill Hermina will ever possess is that of Adept. As Pegasus Knights in Genealogy of the Holy War gain the Adept skill upon promotion, Hermina starting off with said skill is essentially redundant. However, Hermina is still a good unit that can be relied on.

In Chapter 6, Hermina may speak to Seliph, but nothing will result from the conversation.

In Chapter 8, Arthur/Amid may speak to her if neither of them has a lover. This will result in Hermina gaining three points of HP and 100 love points with the initiator of the conversation.

In Chapter 8, if Hermina speaks to Hawk, she will gain one point of luck.

In Chapter 9, if Hermina visits one of the northwest villages, she may initiate a conversation with a fake Shannan, whereupon she will gain three points of defense.

In the Final Chapter, after Freege is captured, if Hermina is in love with either Seliph, Arthur, or Amid, she may speak to her lover in question. This will result in said lover gaining three points of skill.

Hermina is illustrated in the trading card game Fire Emblem Cipher with the following cards: 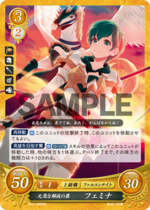 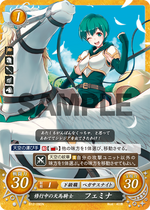 Hermina is a name of Spanish and Greek origin meaning "messenger". Hermina is an alternate form of Hermia, a character from the play A Midsummer Night's Dream.