Heroes Invade (英雄侵攻, Eiyū Shinkō lit. Invasion of Heroes) is the ninth chapter of Book I of Fire Emblem Heroes. 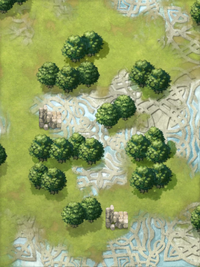 You will have 4 units on your team. You will also have 4 opponents: Michalis, Camus, an Emblian Lance Flier, and an Emblian Red Cavalier.

There is a breakable wall next to your third unit, destroy it so that your other units can pass. But once your first Player Phase ends, the Enemy Phase begins and the enemy team will move to their positions.

When Michalis is close enough, send your powerful Sword unit or your Red Dragon unit to his attack range, counter, and take him down. You can also defeat him with your archer unit, as long as your archer unit is one square away from his attach range.

But beware, Camus, an Emblian Lance Flier, and an Emblian Red Cavalier will move together, and that Emblian Red Cavalier will protect Camus. Send your powerful Blue Tome unit to the enemy's attack range and get him out of your way. Then, defeat that Emblian Lance Flier with your Axe unit or your Archer unit. And finally, defeat Camus with your powerful Axe unit or your Green Tome unit. 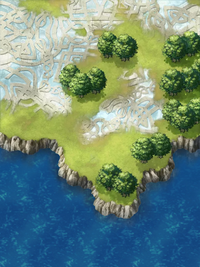 Zephiel is in his position between an Emblian Axe Knight and an Emblian Lance Knight, with an Emblian Cleric behind him. While Narcian is in the bottom left side of the map so that none of your ground units can get to him, unless you have your Sword Flier unit, and then you can defeat Narcian.

Keep in mind that you also need to take out that Emblian Cleric, otherwise she will heal the enemies. 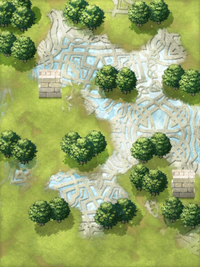 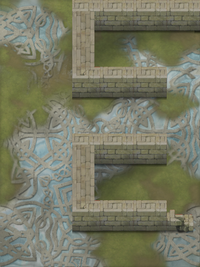 You will have 4 units on your team. You will also have 4 opponents and one boss: Bruno, an Emblian Bow Cavalier, an Emblian Axe Knight, and 2 Emblian Clerics.

Bruno is expecting your team to get to him, as well as the Emblian Bow Cavalier, because they're both protected by the unbreakable walls. Send your powerful Archer unit to the enemy Bow Cavalier's attack range. Then, send your powerful Green Tome unit to the Bruno's attack range. Make sure that both of your units are powerful enough to defeat those enemies, and if they are not defeated, 2 Emblian Clerics will heal them both respectfully. And watch out for the Bruno's Critical Skill "Growing Thunder", which will allow him to attack first even during your Player Phase.

Also, the Emblian Axe Knight will move one square at a time, so defeat that unit with your powerful Red Tome unit.

And make sure you defeat both Clerics as soon as possible. 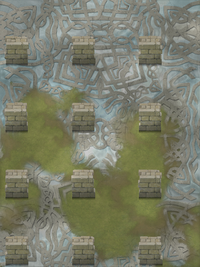 You will have 4 units on your team. You will also have 4 opponents and one boss: Veronica, Xander, an Emblian Sword Fighter, an Emblian Blue Mage, and an Emblian Troubadour.

In this battle, as soon as your first turn ends, the Emblian Troubadour will raise the stats to both Princess Veronica and Xander, and then they will move to any kind of position in order to trick you, so look out for that.

Remember the Weapon Triangle and send your powerful Green Tome unit to the enemy Blue Mage's attack range so you can counter and defeat him. But be warned, the enemy Sword Fighter will have the advantage as soon as he gets closer to your team. If you have a powerful Lance unit, keep your Green unit behind and defeat that enemy with your Lance unit.

When Xander is close enough, take him down with your powerful Lance/Blue Tome/Blue Dragon unit. Also, be aware that the enemy Cleric can heal the enemy at any time, so take her down as soon as possible.

Finally, Veronica will step in and battle. However, you really need to be more careful of her Critical Skill "Reprisal", as she can increase her attack power in order to defeat your units. And don't forget about her other effects, because as soon as she ends her attack, she will damage your other units and she will give them penalties. Defeat Princess Veronica with all the power you have with your Red units and you clear this stage.