Cindy Robinson
[view]
“Why do you refuse Duma's truth? It is incomprehensible...”
—Hestia's battle quote in Act 4 of Echoes

Hestia is an enemy character in Fire Emblem Gaiden.

She is the second eldest daughter of Jedah and the middle sister of Marla and Sonya. She is very loyal to her father and her master Duma, even if Jedah was going to sacrifice her and her sisters to Duma, the Dark God.

In Sonya's base conversation, it is revealed that Marla, Hestia, and Sonya had been abandoned at a priory by Jedah. According to Sonya, while growing up at the priory, Hestia was smart and mature, and also marched to her own beat.

Hestia is first encountered during the Deliverance's assault on Rigel. She is stationed at Rigel Falls where she fights and is repelled by the Deliverance. She later reappears during the final battle against Duma alongside her father and older sister. Eventually, she is killed alongside her family, allowing Alm and Celica's combined armies to finally face and slay Duma.

According to her youngest sister, Sonya, Hestia was smart and mature and and also marched to her own beat.

In Shadows of Valentia, her death quote reveals that she wished she had lived life the way she wanted to, instead of following Duma.

“That's no fair, Sonya... Why should you be the only one allowed to live as she chooses?”
—Battle quote in Act 5

Hestia was the Greek goddess of the hearth. 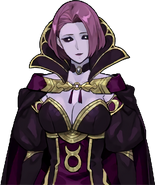 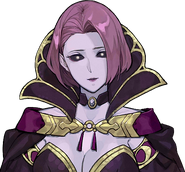