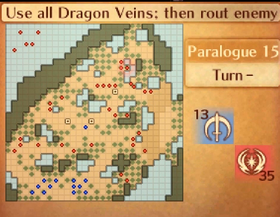 Rout the enemy and Activate all Dragon Veins

Chapter script
[view]
“Xander heads out to see his son, Siegbert, whom he hasn't seen in a while. The group works together to suppress the sudden arrival of enemies.”
—Opening Narration

This paralogue is unlocked when Xander has achieved an S-Support with a female character.

On Lunatic mode, this chapter can be extremely challenging if attempted during later chapters of the game. It is highly recommended to bring as much Dragon Vein using units as possible, to clear the map faster, along with fliers due to the numerous amount of forest in this Paralogue. There is little point to letting more enemies spawn, as all enemy reinforcements have Void Curse and therefore do not grant experience, preventing much experience grinding on this chapter.

The Dragon Vein makes multiple appearances in this Paralogue; activating it will dry out the pools (and stopping reinforcements from arriving) and burn forest into plain tiles for easier movement.

Depending on chapter playthough, Siegbert will most likely need assistance. He has no safe zones at the start of the chapter, and there are several Master of Arms and Onmyojis near him. The nearby enemies only have tomes and swords, so having Siegbert start with Tomebreaker and Swordbreaker are good options to increase his suitability. However, this will not apply on later chapters where it is better off using a Rescue staff instead.

Clear out the Dragon Veins as quickly as possible, to prevent enemy reinforcements from continually spawning. On Lunatic Mode, the Mechanist/Master Ninjas will have Poison Strike. The spawning Great Knights should be taken out carefully, as they all come with a Silver Lance, Armorslayer and Beast Killer.

Move cautiously, as the pools will start generating units which can potentially counter or deal a lot of damage to your units. Make your way up slowly to the top where the enemy commander is. Next to the commander will be a General and Strategist. The Strategist does have a Mend and Freeze stave, but will be unable to heal the Hero. On higher difficulties, the Hero will come with Vantage, Sol and Strong Riposte.

The Hero is standing on a Dragon Vein spot, and by the time the players reach it, should be last one remaining. Rout all remaining enemies and activate any remaining Dragon Veins to complete the Paralogue.

Enemy reinforcements will appear from one, or two pools if playing on Lunatic Mode. Each area gives a specific set of reinforcements which depend on the player's chapter progress:

Regardless of playthrough, all enemy reinforcements will have Void Curse on them.