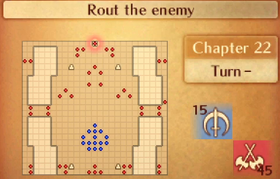 Chapter script
[view]
“The group passes through the Demon's Falls and reaches the capital of Nohr. Sneaking in, they soon find themselves face-to-face with an unexpected enemy.”
—Opening Narration

Hidden Capital (死したる王都 Shishitaru Ōto, The Dead Capital in the Japanese version) is Chapter 22 of Fire Emblem Fates in the Birthright Version. This chapter takes place in Windmire.

You will gain an additional deployment slot in this chapter. It might be a good idea to complete your first child Paralogue by this point, especially because child units will start at a high enough level to gain their third class ability after using an offspring seal if recruited here.

On Normal mode, and to a lesser extent Hard mode, this chapter is essentially trivial. While you begin completely surrounded, you can (and should) tear right through the small number of enemies at the bottom of the map gain a safe spot, then play defensively from there. On Lunatic, however, the enemy force has essentially doubled in number, and must be punched through quickly before you get overwhelmed on all sides. This task can be simplified through aggressive use of attack stance.

Sword units such as Ryoma are invaluable here, as are units that are equipped with the dual naginata. While the enemy force has a variety of weapon types, the bow and axe users, which both suffer weapon triangle disadvantage against swords, are mostly clustered together and may be taken out with relative safety. If Felicia and Jakob have tomebreaker, they could make a good selection to deal with the enemy dark mages and sorcerers. Finally, bronze weapons and the Sunrise Katana can prove to be real life-savers against the enemy Berserkers and Sorcerers, who all come equipped with innate boosts to their critical hit rates.