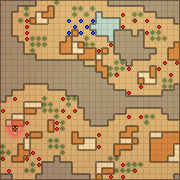 All Allies Escape in 20 Turns or Defeat Boss

Chapter script
[view]
“While mourning the loss of Scarlet, the group make there way deeper into Valla. Azura shares what she knows of this hidden kingdom.”
—Opening Narration

Hidden Strings (滅びの街 Horobi no Machi lit. The Ruined Town in the Japanese Version) is Chapter 19 of Fire Emblem Fates in the Revelation Version. This chapter takes place in the Abandoned Town.

This chapter can be handled in two ways given the chapter's two missions. Your 8 units are on the northern island and merely need to head east to escape the map. However, a Dragon Vein exists on the west part of the map. Using it causes copies of the units brought into this map to appear on the southern island of the map. This southern island is littered with enemies carrying item drops. To maximize this map, bring along your strongest units, though avoid flying units due to the high number of Adventurers, Snipers, and Bow Knights. Remember that you have to either defeat the boss or have all of your original units escape to the west before Turn 20 or else you will lose in this chapter.

After activating the Dragon Vein, quickly have your real units head east immediately and have them all ready to leave when necessary. The replicas will still earn EXP and Weapon EXP for the original units, but Support Levels will not increase as a result of them fighting in Attack Stance or Guard Stance. If Azura is replicated, her Replica will not be able to sing, so she might not be the best of choices for this mission. Using those units will also not expend the turn of the originals. Keep in mind that these are just essentially copy of the originals and the two share HP, thus a Replica's death means the death of the original unit, so express caution when using them. Also be aware of the reinforcements that appear from the west on the Southern Island every two turns. None of them carry drops.

Replicas open up a new world of strategic considerations that are not present in other chapters. As long as a Replica is in play, any given unit will be present on two different fronts simultaneously. You should keep this in mind when you position your units as a unit facing one round of combat on one front might be facing two rounds of combat on another, and the damage incurred form the additional rounds of combat could well spell his or her demise. On the other hand, if a unit cannot engage in battle in one front, you may heal him or her using a Vulnerary, and can even do so AFTER that unit's replica/original has taken damage. Because the original units get a head start over their replicas, the originals will very likely get a few 'empty turns' that they can use to heal themselves,and in turn heal their replicas. By extention, healers will be able to get off multiple rounds of healing per turn, as well. Finally, as long as the original unit has not yet acted, you may freely re-equip them in order to re-equip their replica. For example, you may choose to attack a foe from a distance using a Spear, and then have your 'spare' unit equip a Guard Naginata to bolster their defenses during the coming enemy phase