Cam Clarke (Credited as Delem Donaldson)
[view]
“The name's Hinata! I'm one of Lord Takumi's retainers. I'm skilled with a katana--if I do say so myself. You'll like having me in a fight!”
—Hinata, Revelation Chapter 10: Voice of a God

Hinata is a playable character in Fire Emblem Fates on the Birthright and Revelation routes. One of Takumi's personal retainers, Hinata is a Hoshidan Samurai and a coarse, passionate youth who is skilled with the Katana. If he achieves an S support, he will have a son named Hisame with his spouse.

Hinata hails from a family of samurai who have served the Hoshidan royalty for generations.

Hinata first appears in Chapter 9 alongside his fellow retainer Oboro in the castle interior of Izumo, where they attempt to locate Takumi after he is separated from them. They instead run headlong into a conflict that had broken out between Corrin's army and a group of Nohrian soldiers led by Zola prior to their arrival. When Corrin speaks to Hinata, he divulges the fact that Takumi has gone missing and directly requests for their assistance in locating him.

Hinata subsequently aids Corrin's effort to put an end to the age-old conflict shared between Hoshido and Nohr.

Hinata first appears in the Port Town of Dia in Chapter 10 alongside Oboro and his liege. Deployed on a mission to the port, the three lead an army in an attempt to prevent Corrin's army from making their way to Notre Sagesse by blocking off all access to the ferries leaving port. When Hinata encounters Corrin in battle, he openly insults them for being a traitor before vowing to cut them down for their betrayal. Despite the efforts of the Hoshidans, they are eventually defeated by Corrin's army and forced to retreat.

Hinata appears once more in Chapter 23, where he and Oboro aid Takumi in defending the Great Wall of Suzanoh from the advance of Corrin's army. Positioned in front of the main gate, Hinata makes his last stand but is overpowered by Corrin's forces and falls in battle. In his final moments, he reveals that the Silver Katana that he wields in battle is a treasured gift from Takumi.

Hinata first appears in Chapter 10, where he, Oboro and Takumi are captured by Zola and a small band of Nohrians in Izumo. After Corrin defeats Zola and liberates Izumo, Oboro and the others are released. After hearing Izana's prophecy, Takumi decides to join Corrin's army, bringing along Hinata and Oboro with him.

In Paralogue 11, Hinata enters Hisame's Deeprealm with the intention of reuniting with him. Upon entering the Deeprealm, however, he is greeted by Hisame's cold reception, during which Hisame expresses unhappiness towards his father for having neglected him for a long time and treating him like a child. He then departs in a fit of anger, only to find himself stranded in the Wastelands, facing an impending threat from a horde of Faceless. Hinata, hot on Hisame's heels, leads Corrin's army on a mission to rescue him. Following the conclusion of the battle, Hinata manages to resolve the conflict that had arisen between him and his son by apologizing for his ignorance on the time difference between the Deeprealms and reality. As a means to make up for lost time, he urges Hisame to join Corrin's army, to which the latter agrees.

Cheerful and easy-going, Hinata is a passionate youth who takes pride in his skill with the blade. This can be observed through his supports with Corrin, where he takes offence at their suggestion that he has a reputation for relaxing more than he does training, thereafter seeking to prove the rumour wrong. Through this same set of supports, Hinata is also proven to be a person who prefers proving his worth through action and not words. This fact can be gleaned from him challenging Corrin to a sparring match to prove his mettle in combat.

Hinata has also been revealed to enjoy lending a helping hand or a listening ear to those in need. Across a good number of his supports, he is known to take the initiative to ask after a person's well-being after he perceives them to be in a troubled frame of mind. One such example can be observed through his supports with Felicia, where he immediately expresses concern for her when she heaves a sigh of frustration.

Hinata is also known to harbour a weakness against women, particularly those whom he considers beautiful. This weakness of his has caused him to be the willing victim of women who seduce him into giving up both his wealth and material possessions. This fact is revealed through his supports with Mozu, where he reveals that the lady proprietor of a provisions store has duped him into making purchases of more supplies than the army actually requires. Thankfully, Hinata's weakness to beautiful women does not extend to his skill in battle, where he has no qualms about taking up his sword against female opponents.

Base Class
Swordmaster
Master of Arms

Hinata possesses stats of the knight class, boasting decent growths in HP and Luck. However, he is a myrmidon with horrible Speed and Resistance. Whenever his HP is below 50% and he incurs combat damage from sword-, lance-, or axe-type weapons, his personal skill, Triple Threat, will activate and immediately retaliate half of the damage incurred back at the enemy. Unlike Hana who's growths closely resemble those of classic Myrmidons, Hinata can serve a defensive role that is unusual for his base class, more akin to traditional Mercenary units. His decent growth in HP and middling growth in defense may grant him the bulk to efficiently and consistently tank physical attacks, a durability that is lacking in most Birthright units. Additionally, he joins the army equipped with two Samurai skills: Duelist's Blow and Vantage. Duelist's Blow augments his defensive capabilities as it increases his chance to avoid enemy hits in addition to any avoid bonus he receives from his decent luck growth. In tandem with Triple Threat, Vantage allows Hinata to utilize his physical defense as a means to deal greater counterattacks in a pinch.

One of Hinata's two promotion options is the Swordmaster class. As a Swordmaster, Hinata notably gains a 10-point increase to critical hit rate and avoid rate; the latter of which complements Duelist's Blow and his decent luck. He also gains access to two skills: Astra and Swordfaire. Hinata may seldom see Astra activation due to his middling skill growth and Astra's inherently restrictive trigger rate, so Astra may not be reliable in Hinata's offensive usage, but still useful for piling damage if it activates. Swordfaire increases Hinata's offensive prowess and is a reliable asset if Hinata's career class uses swords. Overall, the Swordmaster class offers tools that can add to Hinata's offensive capabilities, though it does not necessarily highlight his strengths.

Hinata's second promotion option is the Master of Arms class. As a Master of Arms, Hinata sees slightly greater growths in HP, strength, defense at the cost of slightly reduced growths elsewhere. Moreover, he gains weapon access to lances, naginatas, axes, and clubs; giving him effective control of the weapon triangle. The class offers him two skills: Seal Strength and Life and Death. Seal Strength further augments Hinata's defensive capabilities and encourages him to bruise and cripple enemies for his allies to clean up. Because Life and Death foregoes Hinata's defensive capabilities to increase his damage output, it will likely impair Hinata's defensive playstyle. Overall, the Master of Arms class elevates Hinata's inherent strengths and helps solidify his capabilities as a defensive bruiser.

Hinata's secondary class set is the Oni Savage class set makes him more useful by bringing out his natural proficiency in HP, strength and defense. He loses weapon access to swords and katana but gains weapon access to axes and clubs. The Oni Savage class offers two skills: Seal Resistance and Shove. Both skills offer supportive roles for Hinata but neither necessarily augments his defensive capabilities.

One of the Oni Savage's promotion options is the Oni Chieftain class. As an Oni Chieftain, Hinata's gains accented growths in HP, strength, and defense. He also gains weapon access to tomes and scrolls; however, Hinata will likely lack the magic stat and growth to practically utilize these weapons. The Oni Chieftain class offers two skills that improve on Hinata's offensive and defensive capabilities: Death Blow and Counter. Death Blow may greatly increase Hinata's damage output, and it syncs well with the inherent critical hit rate bonus in most clubs. Counter is essentially an improvement on Triple Threat, allowing Hinata to further utilize his bulk offensively against his enemies; the effects of Counter stack with Triple Threat but only when the conditions for Triple Threat and Counter have both been met; it will appear that only Counter will activate as it is higher up on the Priority List but the Counter damage will be multiplied by 1.5 whenever Triple Threat and Counter both activate. Overall, the Oni Chieftain class greatly highlights Hinata's offensive and defensive capabilities.

The Oni Savage's second promotion option is the Blacksmith class. As a Blacksmith, Hinata gains increased growths in HP, strength, and defense, while maintaining middling growths in skill and luck. Moreover, it allows Hinata to use swords and katana. The class offers two skills: Salvage Blow and Lancebreaker. While Hinata possesses decent luck growth, Salvage Blow does not necessarily improve on Hinata's strengths and is only inconsistently serves as a utility skill. Lancebreaker gives Hinata considerable offensive and defensive leverage against lance users—even with swords and katana equipped—and it greatly adds to his offensive capabilities. Overall, the Blacksmith class offers growths that considerably complement Hinata's inherent strengths.

Wild Samurai
A coarse, yet caring, samurai of Hoshido. One of Takumi's retainers. Appears in Fire Emblem Fates.

Samurai Groom
Hoshidan samurai and one of Takumi's retainers. He is wearing clothes outside his usual in order to play the part of bridegroom for the festival. Appears in Fire Emblem Fates.

Hinata is illustrated in the trading card game Fire Emblem Cipher with the following cards: 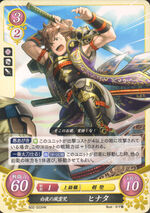 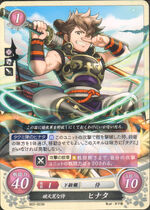 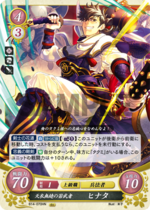 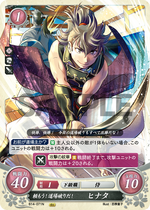