∞
[view]
Hinata's Katana is a Katana that is introduced in Fire Emblem Fates.

Eponymously named after Hinata, Hinata's Katana, like its Japanese name suggests, is modelled after the character's reckless, hotblooded personality, as its Might is doubled when its wielder initiates an attack at the cost of reducing their Strength and Skill post-battle.

Like all katanas, it increases the user's speed by 1, but decreases the wielder's Defense and Resistance. Rather then dropping them by -1 each, it drops them by -3 while it is wielded.

The katana (刀), was the go-to weapon for all samurai of Feudal Japan. Katanas are characterized by their curved, single edged blade. 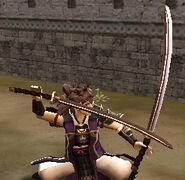