Hino Shinnosuke (日野慎之助) is a freelance illustrator and author whose most notable contributions to the Fire Emblem series are the game novels and manga for Fire Emblem: Thracia 776 and Fire Emblem: Mystery of the Emblem.

The cover of his Thracia 776 manga 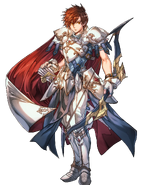