∞
[view]
Hinoka's Spear is a Naginata that is introduced in Fire Emblem Fates. Eponymously named after Hinoka, Hinoka's Spear, as opposed to raising its wielder's Defense and Resistance by 1 like other Naginatas do, lowers both stats instead. In return, however, Hinoka's Spear provides a bonus of 10 Avoid to the user. 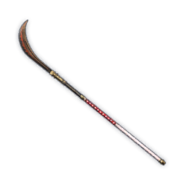