“Now, forget about my old man. This is actually pretty exciting, isn't it? I've always dreamed of traveling the world as an adventurer and seeking out legends. Now that my old man let me go, I can make that dream come true!”
—Holmes, in a conversation with Runan

Holmes (ホームズ Hōmuzu, romanized as Hormes in the instruction manual) is one of the two protagonists of TearRing Saga: Utna Heroes Saga. He is the son of Admiral Vals of Granada and his former wife, Liza. He leads his personal fleet called the Sea Lion, which travels around the world in search of treasure and legends. He is also the best friend of Runan, whom he sees as a younger brother. Infamous for his piracy, he is known as the Conqueror of the Sene Sea.

During his childhood, Holmes often spent time with Runan in order to avoid Vals, whom he viewed as a bad influence. He and Richard also knew each other and fought several times when they were younger.

When the reborn Zoa Empire invades Reeve, Holmes and Runan fight in defense of Granada for one year. Once their efforts are proven to be useless, they escape to the Kingdom of Wellt, where they part ways. While Runan seeks aid from Wellt in hopes of eventually retaking Razelia, Holmes pursues his dream of being an adventurer and travels around the world in search of treasure.

Early in the game, Holmes rescues Katri from the Isla Pirates led by Maerhen. However, his harsh behavior causes her to flee from his crew. When Katri suddenly transforms into Neuron in the midst of a battle, he realizes that she is a shaman with Utna's blood in her veins. During their eventual reunion, he makes a promise to protect Katri. After a brief meeting with Runan, Holmes continues his adventures, during which he defeats the Taurus Bandits and the Isla Pirates. Later, he meets with Richard and Tia in Marl.

If Sasha is sent with Holmes's army after the first route split, the two of them will have a conversation in which she recognizes the jade pendant around his neck, but cannot remember where she previously saw it. In a series of events triggered by this, it is revealed that they are half-siblings, due to them being Liza's children.

Following his meeting with Lionheart in Blood, Holmes becomes involved in the Kingdom of Salia's internal conflict. He eventually liberates Salia from its ruler, Ahab, and discovers that Katri's true identity is Princess Maria. After King Dagnell and Queen Maria are rescued with Zachariah's help, Holmes and Katri separate, as she decides to stay with her parents.

Afterwards, Holmes begins fighting to liberate Granada from the Zoa Empire. Upon defeating the occupying Canaan forces, he is chosen by Vals to become the next Captain General. He also discovers that Attrom is his half-brother and another son of Vals. Before the third route split, he learns that Katri has been abducted by Gwenchaos and embarks on a mission to rescue her. During his quest, Holmes travels to the Temple of Fire, where he unseals the ☆Seiken Salia using the Ring of Salia. Despite his best efforts to save Katri, she is ultimately sacrificed to Gerxel alongside Enteh and Neyfa. After Gwenchaos's transformation into Gerxel, Holmes teams up with Runan, Sennet, and Tia to slay him with a combined attack. When Katri is resurrected by Miradona, Holmes starts crying, although he denies it by claiming that his tears are sweat.

In the ending, Holmes and Runan board the Sea Lion to travel the world alongside Enteh, Katri, and Shigen.

Holmes is generally a very abrasive man, although he has a softer side that he rarely shows to others. He wears a special jade pendant around his neck and reacts with annoyance whenever attention is drawn to it. He is shown to become drunk from wine during some of the story scenes. He also dislikes responsibility and does not want to succeed his father as the Captain General of Granada, instead preferring to travel around the world in search of treasure.

Holmes hates his father and wonders how his mother could have willingly lived with him for five years. However, he is unable to forget Liza, despite having been only three years old when she left him, and simply feels sympathy for her. He also assumes that she is probably remarried and hopes that she is happy. Due to his negative experiences with his parents, he dislikes hearing about the subject.

Holmes is usually irritated by Katri's behavior and frequently insults her, mostly by claiming that she is an idiot. As the story progresses, it is heavily implied that he falls in love with her, although he refuses to admit it. He also has a tendency to become angry and embarrassed when others assume it. However, his true thoughts occasionally slip out, as seen when he compliments her at one point and mentions that she is precious to him in a conversation with Clarice.

Holmes is the second lord in the game, and despite being forced to use bows before promotion, he is a quite useful unit with good bases and decent growths to back them up. His skillset is okay at first, but he learns some very good skills later on. Since there are some ridiculously useful bows in this game, he is average at worst and incredibly good at best. Upon promotion, his stats improve and he gains the ability to use swords, which greatly helps his offense on the enemy's phase. It is recommended to train him both for these reasons and the fact that he is required for the final boss.

Holmes is an English surname with several origins. It can be a variant of the surname Holme. It could also be derived from the Old English holm and the Old Norse holmr.

Holmes's portrait as a Hide Hunter.

Holmes's second portrait as a Hide Hunter, seen in the final chapter. 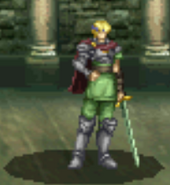