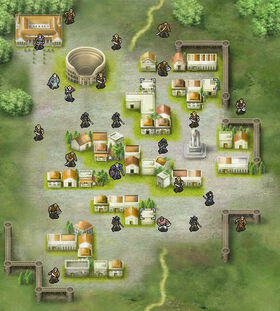 Maerhen (automatically from the start)
Plum (if kidnapped in Map 10, have Holmes or Barts visit the top right building)

Chapter script
[view]
“I live in Oasis town, which is north of here. Oasis town was peaceful once, but the conditions have worsened due to the continuing war. Now we are ruled by the ruffians and deserting soldiers. I went out to Sene city to ask for the help of Prince Runan instead of the mayor.”
—A maiden from Oasis Town seeking help

The enemy AI in this map is a bit strange, as almost every enemy will move in random directions, at a random amount every turn, meaning that sometimes certain spots will be more dangerous to wait in than it would be otherwise, as there could be three or four enemies in attack range of that spot sometimes, and other times there could be none depending on the RNG. For this reason, it might help to be a little extra careful.

Vega with a thunder sword plus a magic staff use from Mel will be able to one round almost every enemy on this map from his base stats, including the boss. This is especially helpful with a lot of enemies here having two range or being difficult to one round kill by most units normally.

If the player has sent Vega with Holmes's team at the route split earlier in the game, has Shigen listen to Krisheena's request in the event earlier, and deploys all three of them on this map, Vega and Shigen will duel each other at the start of the map. This increases their support level with one another, as well as with Krisheena, but at the cost of bringing both Vega and Shigen to 1 HP.

If Plum was kidnapped in Map 10, then she can be rescued by either Holmes or Barts and will be re-recruited with the Dance skill.

You are able to pick 5 out of 28 treasure chests. 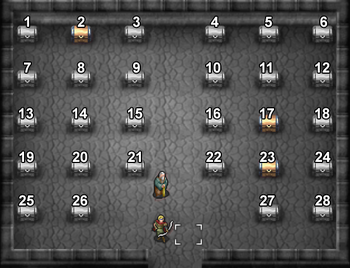