SungWon Cho
[view]
“Be he Almyran or no, any young man with compassion and good conduct is worthy of respect. Character is what really matters, not the place of one's birth.”
—Holst talking about Cyril in a letter

Holst is a character mentioned in Fire Emblem: Three Houses before appearing in Fire Emblem Warriors: Three Hopes as a route-locked playable character in the Golden Wildfire route. He is a duke of the Leicester Alliance, the head of House Goneril, and the older brother of Hilda.

A former student at the Officers Academy, Holst was credited for securing victory for the Golden Deer at The Battle of the Eagle and Lion during his academic year. He also befriended Balthus von Albrecht in these years.

Duke Holst Goneril inherited his family's title sometime before Imperial Year 1180. As the head of House Goneril, Holst was charged with defending the Leicester Alliance from invasions from the neighboring kingdom of Almyra and managing the fortress of Fódlan's Locket. He earned a reputation as Leicester's greatest general.

Prior to Claude being recognized as the true heir of House Riegan, many thought Holst would succeed Duke Riegan as the new leader of the Alliance.

In 1180, Holst fell ill amidst an Almyran attack on Fódlan's Locket. Hilda was summoned to take over the defense of the fortress in her brother's stead. Fortunately, his illness was merely food poisoning from eating a bad mushroom, and he was expected to make a full recovery shortly after the battle with the Almyrans ended.

After Claude's defeat and the merging Alliance and Imperial forces, Holst falls ill and sends a message to Edelgard to defend Fódlan's Locket in his stead.

In 1185, Holst made an agreement with Claude and Nader to allow the Almyran army to enter Fódlan, to assist in the capture of Fort Merceus.

Following the destruction of Shambhala and the resurrection of Nemesis, Holst led the Alliance forces in a battle to stop his violent rampage across Alliance territory. Hopelessly outmatched, Holst sustained serious injuries battling Nemesis, but bought enough time for his colleagues to retreat and send word to Claude at Garreg Mach.

Holst will automatically be recruited midway through the Main Quest for the fifth chapter of the Golden Wildfire route, where he is additionally automatically playable. He is only recruitable during this path.

Holst will only be playable during the Scarlet Blaze or Azure Gleam paths through the Record Keeper during a New Game+ file, as long as that file has completed Golden Wildfire data. 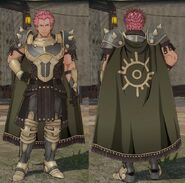 Holst as he appears in Fire Emblem Warriors Three Hopes.