General
[view]
“I betrayed my fellow knights and besmirched their good name. I will not dress up my sins as kindnesses! I accept my punishment. Allow me to die a knight's death.”
—Horace in Shadow Dragon.

Horace is a General and one of the exclusive characters in Fire Emblem: Shadow Dragon and its sequel-remake, New Mystery of the Emblem. He appears at Chapter 12x in the former and Chapter 10x in the latter.

Horace is knight who hails from a town near Castle Archanea. His loyalty to his homeland is absolute. When his people were being threatened by Dejanira, Horace was forced to betray his homeland and enlist himself under the ranks of Dolhr. All began to brand Horace as a traitor once he began serving Dolhr, but Horace did it in act of protecting his people, as even stated by a few villagers from the nearby villages.

Once Dejanira has finally been killed, Horace is relieved and turns himself in to the Altean Army. He joins Marth´s army on orders of Princess Nyna, and because he needed to "pay for his treason against the crown".

Horace returns again in the remake of Book 2 and is captured by Legion, one of Eremiya's Assassins, and not given the reason why. However, it is stated in earlier chapters by Clarisse that other than being ordered to assassinate Marth, they were also given orders to eliminate all his allies one by one that fought under his banner in the previous war to reduce the chances of them rejoining the Altean army and increasing its ranks. This could possibly explain why Horace was targeted by the assassins. When Horace is confronted by Legion, he is able to best a few of Legion's "brothers". Legion takes this scene for amusement and watches to see how long Horace can last before having the advantage to kill him, due to having no end to his clones until the real Legion is killed; however, the Altean army arrives just in time and aid Horace in defeating Legion and his clones. After meeting up with Marth again, he once again fights under his banner until the war concludes.

Clear Chapter 12 with 15 or less units (in your entire army) to unlock Chapter 12x. Horace is an enemy in this chapter. You can have Marth talk to Horace, but the only way to get him is to complete the chapter without killing him.

Horace joins automatically at the beginning of Chapter 10x.

Nyna pardoned Horace after the war, and he resumed his life as a landed noble. In the years to come, he worked hard to heal Archanea.

"Horace returned to his lands in Archanea, dedicating himself to their restoration."

Horace is illustrated in the trading card game with the following card: 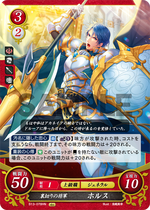 Horace as a General in Fire Emblem 0 (Cipher).