The Horseslayer (ナイトキラー Naitokirā, lit. Knight Killer), also known as the Knight Killer in Fire Emblem: Path of Radiance and the Ridersbane in Fire Emblem: Shadow Dragon, is a Lance that recurrently appears across the Fire Emblem series. Like the weapon's name suggests, it is one that is notable for its ability to inflict effective damage against units that are mounted on horseback.

The Horseslayer is the lance equivalent of the Poleaxe and the Longsword, the axe and sword (respectively) that also inflict effective damage to units mounted on horseback. The weapons are effective because of the abundance of horse-based mounted units across the series, both as playable characters and enemies. Of the three, the Horseslayer is considered to be the weakest statistic-wise, although it does possess a considerably higher Accuracy rate than the Poleaxe. This can be attributed to the fact that lances are generally more accurate than axes are.

In Fire Emblem: The Binding Blade, the Horseslayer is not effective against Nomads and Nomadic Troopers.

In Path of Radiance, Valkyries, despite being mounted on horses, do not sustain extra damage when the lance is wielded against them. While this might appear to be beneficial to such units, this is not necessarily true, as they are not renowned for their physical defensive capabilities.

In Awakening, the Beast Killer may be considered to be the replacement of the Horseslayer. This lance is by far superior to its predecessor, as it inflicts effective damage not only to horseback units, but also indiscriminately extends its special ability to any other unit that is beast-based (including Pegasi, Griffons and Taguels).

Official artwork of the Knight Killer from the TCG.

Concept artwork of the Horseslayer in Path of Radiance.

Concept artwork of the Ridersbane in Fire Emblem Echoes: Shadows of Valentia.

The Knight Killer, as it appears in the first series of the TCG. 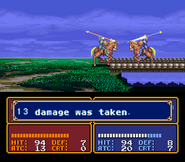 An allied Social Knight wielding the Knight Killer in-battle in Mystery of the Emblem.

Nephenee wielding the Knight Killer in Path of Radiance.