Matthew David Rudd
[view]
“Hey, don't look at me like that! I'm pretty decent with my magic. You can hire me for 10000 gold.”
—Hugh, offering his services to Roy

Hugh is a playable character from Fire Emblem: The Binding Blade. Hugh is a mercenary mage; he is the grandson of Niime, the son of Canas, and cousin of Nino.

He was raised by his extremely strict grandmother and holds a grudge towards her about it. When the Etrurian defectors abandoned their fort, he is so worried about not getting his pay that he goes over to Roy's army for a job. Hugh is portrayed as very naive to the point of being called childish by younger characters like Chad and Raigh, but he is sincere and good at heart.

Hugh must be paid a large sum of money to be recruited. The player has the option of paying him 10,000 gold, but can decline the offer and choose to pay him a lower sum. Each time the player declines though, his starting stats decrease. If the last offer (5,000G) is declined, he refuses to join the party.

He continued his studies in magic after the war.

Description: A mage hired by Etruria. Desperate for money.

Note: Stats listed are for his highest joining price of 10,000. Every attribute is reduced by 1 for each offer you turn down.

For a character of his asking price, Hugh tends to be somewhat subpar. If the player plans to use him, they should probably pay his full cost, as Hugh's stats are already fairly mediocre at base level and he doesn't tend to be able to take the stat loss. Additionally, Hugh has fairly subpar growth rates and a very high base level, which means that it's generally best to try turning him into a Sage as soon as possible; fortunately, Guiding Rings are purchasable in the chapter with his Member Card in hand, but this tends to require another pile of gold.

Fortunately for Hugh, once he has become a Sage, he is surprisingly workable. The promotion bonuses significantly boost his stats, including a +4 to HP and Magic and a +2 to Defense, making him hit surprisingly hard. He is also fairly sturdy by the standards of a magic unit, due to his 9 base Defense and tolerable defensive growths. He also gains E-rank Staves, turning him into a decent enough healer, and his tome rank is raised to B, allowing him to wield Aircalibur. This will allow him to deal hefty damage to wyvern enemies, which are some of the deadlier encounters in the lategame. Hugh's main statistical weak point is his Speed, as he gains relatively little Speed from promoting and has a mediocre base to begin with, even if it is one of his better growths. This means that he tends to be stuck with chipping enemies, whereas characters like Lugh can heavily damage or one-round them instead.

In general, Hugh is outclassed by a trained magic-user or even some later characters like Niime, but his Anima access and lack of required training can make him a decent enough option if the player has the gold to spare.

Worldly Mage
Taking after his grandmother Niime, he traveled the world to research dark magic. His travels, however, led him to focus on anima magic. Appears in Fire Emblem: The Binding Blade.

Hugh - Streetwise Mage (世長けた魔道士 Yo taketa madōshi)
"Although many nations sought out his service, Hugh turned them all down and led his life on his own. He always was a pain when it came to money, but his magical abilities allowed him to imprint his name on history's face as a great and powerful sage."

Hugh is illustrated in the trading card game Fire Emblem Cipher with the following cards: 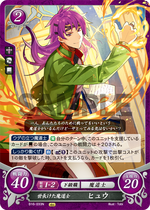