Nohr’s tactician, Iago is almost a shadow of Garon. He always agrees with the King and does not like to disappoint. He excels at witchcraft, and enjoys using tactics that involve foul-play and behind-the-scene manipulation.

Iago first appears in Chapter 8, leading the Hoshido army into killing several members of the Wind Tribe by using his magic to disguise them as Faceless. After the spell is lifted, he taunts them and leaves before the Wind Tribe finds out that he cast the spell on their fellow tribesmen. Later on, during Chapter 16, Takumi falls ill to a rare disease local to the region, and the Hoshidans look for medicine to cure him at one of Garon's villas. Iago teleports inside and taunts them further, before using fire tomes to light Flora on fire, although it does not kill her. After the battle, he taunts the Avatar again, telling them that there is a "traitor" within their ranks and laughs while the Avatar struggles to find out who the traitor is before disappearing.

During Chapter 20, Iago appears at Fort Dragonfall, still taunting the Avatar. He tells them that Garon gave him new power and demonstrates it by reviving the dragon that is a part of the fortress. Knowing that they would die anyways from the dragon's stomach acid, he decides to speed up their deaths by summoning a horde of Faceless. However, his plan fails again.

During Chapter 25, Iago meets the Avatar and their allies at a staircase to the throne room. He taunts the Avatar by revealing how weak and careless they are, telling them that the traitor was still with them. He then brainwashes Takumi, revealing that he was the traitor in their ranks and threatens to kill Azura with him. Azura tries singing to break his hold on Takumi, but Iago stops her, knowing what would happen. Iago then gets interrupted by Sakura, who distracts him long enough to allow Azura to remove his control over Takumi.

Iago then battles the group, only to be defeated again. In an attempt to have the Avatar spare his life, he tells them that he too was under Garon's control. However, Leo had been watching and is disgusted with Iago, saying that it was pathetic enough for him to beg for his life after defeat. Iago thinks that Leo is going to save him from the Avatar, but Leo asks him if he's deaf because he had just told him he wasn't his ally. He is then executed by Leo, who knows that Iago would taint the future of Nohr.

In Chapter 25, inside the Hoshidan Palace, Iago appears and talks to the Avatar, reminding them of what they need to do, to their discontent. Although Xander wants to help the Avatar out, Iago tells him that he still has a task to do and leaves with Garon. In Chapter 26, Iago appears with Hans and wants the Avatar killed, but their siblings protect them from him. As a result, Iago and Hans, along with some of their soldiers and Faceless attempt to kill all of them. After Iago is defeated by the party, he tries to save his own life by negotiating with them but is killed by Leo.

In this route, Iago first appears in Chapter 9, once again leading the Avatar's army into a trap against the Wind tribe. After the Avatar discovers that there were fighting Wind Tribe members, Iago laughs sinisterly and teleports away to not give away the fact that he set up the trap.

In Chapter 14, he welcomes Xander back to Castle Krakenberg after his return from Amusia. Xander seeks audience with Garon, and Iago wonders if the Avatar was a bad influence on him. Hans joins Iago, saying that’s impossible for the crown prince to be influenced in such a way, but Iago disagrees. They also mention about the fact that Camilla joined the Avatar's army. He warns they have to be careful and do something about the Avatar soon, not knowing that Elise is overhearing them, which causes her to join the Avatar's army.

Iago then appears as the boss of Chapter 17, trying to put a stop to the Avatar's combined forces from both the Hoshido and Nohr sides after Hans has been killed. However, just like in the other routes, he fails and ends up dead.

Iago: You're like a rather pesky cockroach, you know that? Just when I think I've got you under my foot, you scamper away.
Avatar: Sure. Just keep talking. It's what you do best. I'm through talking.
Iago: Well, then! I'll save the rest of my clever analogies for another time... And kill you right now. HAAH!

Iago is the villain of a tragic Shakespearian play, Othello, in which he masterminds the downfall of the capable and powerful Othello out of jealousy.

Macbeth is the titular character of another tragic Shakespearian play, Macbeth. In this play, Macbeth and his wife devise a plan to assassinate the king and claim the throne, marking their ruin. 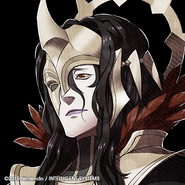