--
[view]
The Ice Dragon (氷竜 Hyōryū) is both a race and a class of Dragons that is first introduced in Fire Emblem: Mystery of the Emblem. An uncommon type of Dragon, Ice Dragons expel Ice Breath in order to damage their foes. The Ice Dragon race also appears in The Blazing Blade, where it acts as the true identity of the mysterious sibling pair Ninian and Nils.

In the remake of Mystery of the Emblem, only feral Ice Dragons employ a separate Ice Breath weapon as their means to attack, while Manaketes directly use Icestones as weapons instead. This version of the class sheds its high Strength in Mystery of the Emblem, and is instead blessed with high Defense. As before, any Manakete can transform into an Ice Dragon with the use of a Icestone, regardless of whether or not they are members of the Ice Dragon Tribe.

In Vestaria Saga I, the Ice Dragon is known as the Icewyrm. Only one Icewyrm appears in the game. It's ice breath can inflict paralysis on foes.

In Mystery of the Emblem and its remake, the Ice Dragons lived in the cold northern region of Archanea and within the Ice Dragon Temple. Like the other Dragon tribes, the Ice Dragons were heavily impacted by a plague of degeneration that caused them to lose their sanity and turn feral. The impact of the plague was particularly pronounced amongst the members of the Ice Dragon Tribe, as in-game events depict the tribe as one that is devoid of any Manakete survivors, perpetually composed entirely of hostile, feral dragons.

In The Blazing Blade, Ninian transforms into an Ice Dragon after her adamant refusal to aid Nergal in furthering his nefarious scheme of opening the Dragon's Gate. Bound to her dragon form and devoid of the memories that she has forged with her previous companions, she is left with the single desire to see Eliwood, whom she has fallen in love with. Upon encountering Eliwood, however, it is evident that he does not recognise her due to his not having any prior knowledge of her true identity. Armed with Durandal, Eliwood tragically slays her. Using her remaining quintessence to regain her human form, she is granted one final reprieve in briefly regaining her memories at death's door, whereupon she reveals both her and Nils' secret to her companions. This secret is one that reveals that Ninian and Nils are human and Ice Dragon hybrids (their mother was an Ice Dragon and their father a human) who hail from another realm that lies beyond the Dragon's Gate. In the Final Chapter of the game, Ninian is resurrected by Bramimond to halt the impending onslaught of two out of the three Fire Dragons who encroach upon the human realm through the Dragon's Gate.

A Level 10 Ice Dragon, as it appears in the fifth series of the TCG.

A Level 10 Ice Dragon Manakete, as he appears in the fifth series of the TCG.

CG artwork of Ninian in her Ice Dragon form from The Blazing Blade.

CG artwork of Ninian and Nils as Ice Dragons from The Blazing Blade.

Generic class portrait of an Ice Dragon from New Mystery of the Emblem. 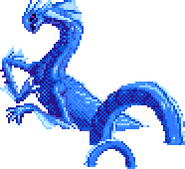 Battle model of an Ice Dragon from Mystery of the Emblem. 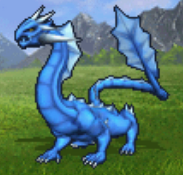 Battle model of an Ice Dragon from New Mystery of the Emblem.