Final Chapter: Beyond the Darkness (The Binding Blade)

Minae Noji
[view]
“ I have been instructed to lead this world. I will bring peace. Why do you bar my path?”
—Idunn

Idunn is the final boss of Fire Emblem: The Binding Blade. She is the Demon Dragon who is also known as the Dark Priestess.

Several centuries ago, Idunn's tribe, the Divine Dragons, had remained neutral in the Scouring, a deadly war in which humans and the Dragon brethren both shared the goal of total extermination of the other side. However, when the Dragons started to lose due to their inability to keep up with the numerous and fast breeding humans, the dragons appealed to the Divine Dragons for volunteers to turn into a Demon Dragon and increase their forces with artificially spawned "War Dragons."

When the Divine Dragons refused to do so and disappeared, Idunn stayed behind because she feared the Divine Dragons would go into conflict with the others and was captured. Idunn was made into the Demon Dragon, but when she would not follow the commands given to her, the dragons removed her soul in order to gain control over her. Now an empty shell sworn to obey the leader of the dragons, Idunn started creating war dragons at an incredible rate.

With the endless number of War Dragons, the Dragons now had the advantage over humanity. However, when all hope seemed lost for the humans, the Legendary Heroes of humanity rose to prominence, each wielding a legendary weapon created by combining the best technology and magic.

With this new advantage, humanity began to lead the final push against dragons. This culminated in a final battle in the Dragon Temple, where Idunn resided. In the massive battle, the sheer power of the legendary weapons led to the Ending Winter, which forced the Dragons to become Manaketes.

As humans stormed the temple, they killed the Dragon's leader and wiped out almost all of the dragons within the temple. However, when the heroes reached Idunn, they saw only a sad shell of a little girl, staring into space with no orders to obey. The leader of the heroes, Hartmut, felt pity for Idunn, having heard of rumors of her tragic plight, but unwilling to let her potentially endanger humanity, chose to seal her away with the Binding Blade.

About a millennium after her defeat, she is unsealed by Zephiel, Hartmut's descendant and the current King of Bern, and serves him as a vital part in his scheme to bring new order to the world by replacing humanity with the emotionless war dragons.

Before his death, Zephiel ensures Idunn will continue to follow his commands in case of his death and entrusts her protection to Jahn, the last Fire Dragon left on Elibe and the only survivor of the battle at the Dragon's temple.

If the player collects all the Legendary Weapons, Roy will go out to find Idunn after defeating Zephiel. Despite Roy's pleas and insistence that she should not follow the now deceased Zephiel's commands, she refuses to submit and transforms into her dragon form to attack his army.

If Roy deals the final blow with the Binding Blade, Idunn once again survives her battle and is taken to Arcadia; she is seen laughing and playing with Fae, finally showing signs of recovering her soul. Otherwise, if any unit aside from Roy deals the final blow on her, she will be killed by the falling rubble in the collapsing temple. If the player fails to get all the Legendary Weapons, the game ends after defeating Zephiel, and Idunn will disappear.

In the past, Idunn, like the other Divine Dragons, insisted on maintaining her neutrality in the Scouring and refused to fight humanity even after becoming a Demon Dragon.

Upon the sealing of her soul, Idunn became a drone who showed little emotion and slavishly followed her current master, even after their death. She is also shown to be rather emotionless, regardless of the situation.

Description: The demon dragon that was feared by all mankind during the Scouring.

Dark Priestess
Transformed into a Demon Dragon and sealed during the Scouring. She was awoken by Zephiel and serves him so he may realize his ambition. Appears in Fire Emblem: The Binding Blade.

As a powerful Armored Dragon class, Idunn has solid HP and Attack and phenomenal Defense and Resistance, with her only weak stat being Speed. While similar sentiments can be shared among other Armored Dragons, what makes Idunn special is the unique trait of her weapon, Demonic Breath. If she is injured or debuffed before combat in any way, all debuffs she has will be negated and she will instead gain +4 to every stat sans HP during combat. This allows her to blatantly ignore Ploys, Smokes, Panic etc., all things that would heavily cripple a tank.

In her base kit, she comes with Fort. Def/Res 3 to capitalize on this bulky playstyle, which gives her a permanent Def/Res+6 in exchange for -2 Attack. Vengeful Fighter 3 offsets the Attack drop and low Speed by giving her two attacks and extra cooldown acceleration for each if the enemy initiates combat with her, which without Guard will result in her second hit being an instant Bonfire bolstered by her massive Defense stat. Her final passive skill is Ward Dragons, an ability that helps her nearby Dragon allies by giving them Def/Res+4 during combat.

Imposing as Idunn's weapon and statline may be, she is still an Armor and a Dragon and carries the weaknesses of both, though it should be noted that she is bulky enough to take at least one hit from Anti-Armor or Anti-Dragon weapons. An armorkiller that favors the Desperation skill like Hana or someone with guaranteed doubles and counter-blocking like Legendary Marth are the safest options. Legendary Julia utterly destroy her thanks to her high Atk and Weapon Triangle advantage; Oboro works similarly as a more budget option.

Should neither of these options or anything similar be viable however (due to Idunn's ally units or team constraints), Idunn becomes a much harder problem to solve, as her innate bulk mixed with whatever her allies may be giving her can make for an incredibly stubborn obstacle that will take multiple attacks to bring down. If melee combat is unavoidable, the best option is to let Idunn initiate on your unit to lessen the threat of an instant Bonfire activation; melee should not even think about initiating on Idunn without Guard active. Ranged units can also chip away at Idunn's HP as her base kit has no response to them.

As an Armor, her movement is only one space per turn, so any skills that allow her to move further are preferred. Swap or Pivot for Assist skills, and/or (if she is allied with armors) the Armor March C Skill, are the most prominent options.

While Bonfire on its own is a quick and cheap option, Idunn can just as easily use its superior version Ignis as her Special to really reap the benefits of her massive Defense stat. Or should she want more survivability, Sol or Aether will suffice.

The A Skill tends to be a toss-up between her base Fort. Def/Res 3, which doubles down on her tanking ability, and Distant Counter, which drops some of the bulk in exchange for being to counterattack Ranged enemies.

Vengeful Fighter as the B Skill is acceptable, but she has stronger options: Bold Fighter gives her two attacks and cooldown acceleration for a much more threatening Player Phase, while Special Fighter accelerates her cooldown while slowing the enemy's. Both cases will ideally want Quick Riposte as the Sacred Seal so as not to neglect her Enemy Phase.

Dragonkin Duo
The last of the dragonkin on the continent Elibe. They heard about the spring festival and are trying the costumes out for themselves. Appears in Fire Emblem: The Binding Blade.

Idunn is illustrated in the trading card game Fire Emblem Cipher with the following cards: 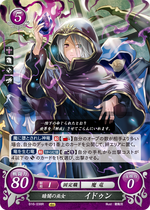 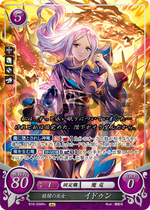 Idun is the Norse goddess of eternal youth, who guards the golden apples of immortality which keep the gods young. In one myth, a giant named Thiazi captured Loki, the Norse trickster god, and only released him on the condition that Loki help him steal Idun's golden apples. Loki obliged, luring Idun away by saying he had found more apples like her magical ones. When the gods began to age and die without Idun to guard their youth, they forced Loki to rescue her again. He disguised himself as an eagle, flew to Thiazi's palace, and there transformed Idun into a nut and carried her back to Asgard, the gods' kingdom. Thiazi pursued but burned his wings on the fires the gods set against him, fell to the ground, and died. Idun was returned to her original form in Asgard.