Chapter 14: Flames on the Blue

Kirk Thornton
[view]
“One ship against three of ours? They're either very brave or very stupid...”
—Ignatius in Chapter 14

Ignatius (プラーゼ Puraze, Blase in the Japanese version) is an enemy boss character from Fire Emblem Awakening. He is a Valmese commander who leads the Valmese navy as they sail to invade Ylisse, Ferox, and Plegia. He is described as being valiant and unyielding.

“Arrogant pup! The seas are my home, and they will be your grave!”
—Ignatius' pre-battle quote
“Strike me down, and ten will take my place... You...have...lost!”
—Ignatius' death quote

It also means "fiery one", deriving from the root word "ignite". After defeating Ignatius, the Valmese fleet is burned at sea. 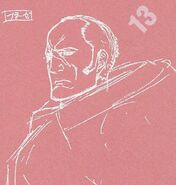