Kaiji Tang
[view]
“You're living proof that even cowards like us can make our way in the world.”
—Ignatius to his father

Ignatius is a playable character in Fire Emblem Fates.

Ignatius is the son of Benny. He can also be the brother of Male Kana or Shigure if Benny achieves an S-Support with the Female Corrin or Azura. Like other children of Fates, he was placed in the Deeprealms to protect him from the war.

In his Paralogue, Ignatius leaves his Deeprealm and heads to Nohr. Along his journey, he eventually comes upon a Hoshidan village being attacked by invisible soldiers. Despite some initial fear, he musters the courage to tell some villagers to run away while he stands in between them to protect them from the invisible army. As they accept his offer, he tells them to seek help if they can find any. He clutches onto a charm that his father gave to him as a gift, giving him the strength to be brave for the sake of the village. As luck would have it, the villagers eventually stumble onto Benny. Hearing of his son's plight, Benny and the army head straight to the Village to save his son and protect the village. After a long battle, the village is safe from the invisible forces. Benny approaches his son, proud of his newfound strength. Ignatius plays down his father's compliments, saying that if not for his original rescue, he would have most likely been killed. Knowing that he still is not as strong as his father, he demands to join the army to become stronger alongside his father. Benny obliges, but tells Ignatius that he is not as brave as he thinks as he has only been in war for a short time compared to most of the other war hardened members of the army. Nevertheless, Ignatius tells his father that he wants to become a hero just like him and Benny responds that Ignatius is fine just the way he is.

Despite Ignatius' rough looking exterior, he is extremely timid and very kindhearted, much like his father. However, when time is needed, Ignatius is perfectly capable of displaying strong valor and courage to protect the weak, even if the enemy is clearly stronger than he is. He is fond of cute things. Ignatius idolizes his father, wanting to become a hero like him and displaying the same strength he does. He carries a charm made by his father for protection and strength and is his most treasured belonging. During their support conversations, Ignatius and Benny have an awkward time communicating.

Ignatius has a wide variety of fears, most notably bugs. He is so afraid of them, that he cannot even approach one, let alone touch them knowingly such as in Midori and Sophie's supports. His mother takes care of it in his stead in their supports and even his father uses it as a test of his courage in their support. He is easily spooked at night, once commenting that he saw a terrifying visage of a demon, only for him to realize that his mind warped the image of his stuffed bear. He is also terrified of ghosts and clowns, as revealed in his supports with Selkie.

*Ignatius will receive whatever secondary class that Corrin has access to if he has achieved an S-Support with her.

Ignatius starts off as a Knight, granting him a good boost to his otherwise average Defense growth and making him a good tank. Further improving his durability is his inheritance from his father, who is usually able to pass down a good amount of defense. From the Knight class, Ignatius gains Defense +2 and Natural Cover, further increasing his defensive capabilities. The Knight's promotions are Great Knight and General, which pass down Luna/Armored Blow and Wary Fighter/Pavise respectively. Luna can help Ignatius dish out some additional damage, and Armored Blow allows him to approach the front lines and land the first hit without much fear of retaliation against physical forms of damage. Wary Fighter can be a good fit for Ignatius due to his poor speed growth and usually poor speed inheritance from his father, while Pavise further improves Ignatius' ability to absorb enemy attacks.

Ignatius will inherit the Fighter line. From the base class he gets HP +5 which should be swapped out for better skills & Gamble which can be risky depending on the skill boost he gets from his mother. From the Hero he gets Sol & Axebreaker. From the other promotion Berserker he gets Rally Strength which should be swapped out unless one wishes to use him as a Rally unit, & Axefaire which is good given that both promotions of his base class have access to Axes. 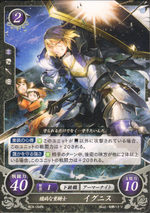 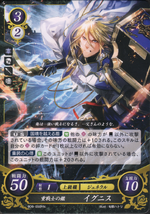 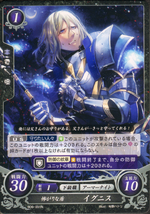