Krizia Bajos
[view]
“If we can live together with Dragons, there should be no reason why the outsiders can't...”
—Igrene in a support conversation with Sophia.

Igrene was born in Arcadia, a village hidden in the Nabata desert, as the daughter of the Hawkeye, the Guardian of Nabata, and an unknown mother.

While not seen during the events of Blazing Blade, she is mentioned a few times during the game. While fighting Limstella, if the player has Hawkeye visit the shrine where Sophia is, before she leaves, Hawkeye asks her to tell Igrene that he will be home soon.

In addition, in Hawkeye's support conversations with Louise, Louise tells him that she bought two bows, one for herself, and the other as a gift for Igrene, and urges him to return home soon so Igrene will not be lonely. Later on, in return, Hawkeye gives Louise a beautiful necklace that once belonged to his wife, and tells her to give it to Igrene if he dies in battle.

Years later, while travelling through the desert, Igrene came across a man named Gorlois, who was unconscious because he had sustained many blade wounds and was suffering from amnesia. She took him back to Arcadia, where she tended to his wounds and, as time passed, they both fell in love with each other. During this time, Gorlois began to recall some of his memories, which Igrene reacted to in both joy and fear. They later married and had a daughter together. However, their happy lives together came to an end when a horde of bandits attacked the village, after which Gorlois left to fight them off. Following this, Igrene never saw him again, and some time after, her daughter tragically passed away of unknown causes.

During the war of Bern, Arcadia is under attack from Bern forces led by Randy, who have discovered that Dragons reside there. Meanwhile, Igrene tries to protect the village, and especially Fae, who is a Dragon herself and whose existence must not be exposed to the enemy. After the battle is over, Igrene joins Roy and the Lycian League to help them defeat Bern so that Arcadia will not have to worry about them attacking again. However, shortly after she and the army depart the village, Fae is captured by Bern's forces, but is rescued soon afterwards, and she and Igrene continue with the group.

After the war finally comes to an end, Igrene states that she will return to Arcadia, just like Sophia and Fae have. However, it has been reported that she has been seen in different parts of Elibe, and it is unknown how Igrene lived the rest of her life. It is possible that she left to search for her husband, but her future is unclear.

Igrene has an overall rather solemn, but very just and loyal personality. As the Guardian of Nabata, she takes her role very seriously, doing everything she can to protect her homeland, whether it be with her bow and arrow or through diplomacy, such as when she asks Etrurian general Douglas to not have his fellow comrades attack the village. However, outside of this demeanor, she has a very soft side to her. She is in deep pain and sorrow over the loss of her family. She holds back her emotions when talking with Fae, even though it is clear she is pained by these thoughts. However, when she tries to convince Astolfo that he is indeed her husband Gorlois, she is much more emotional about the situation, especially at its conclusion, when, after doing some research, learns that he was a spy and realizes why he disappeared. It also turns out that she was a fairly religious individual, until her husband disappeared and her daughter died.

Through support conversations, it is shown that Igrene is very good friends with Sophia and Fae, since she is their sole protector. In fact, to the both of them, she acts as sort of a kind and gentle mother figure, having had a child in the past. This is especially the case with Fae, who Igrene treats much like her daughter. She speaks to and treats her much like a mother would, and they both share a very close bond, such as when Igrene scolds Fae about keeping her promises or offering to braid her hair. The same can somewhat be said for the relationship between Igrene and Sophia, as Igrene acts as a guide for Sophia, who has not been exposed to the outside world until recently.

Description: A sniper known as the Guardian of Nabata.

Igrene joins near the Ilia/Sacae route split, and is a decent Sniper. Her bases are high for her join time, barring HP, even on Hard Mode. Unfortunately, she only has B-rank bows, which does make her have to grind for weapon experience if Silver Bow use is desired. She does suffer from being a non-mounted unit. She is one of the best users of the Brave Bow, as she possesses a good base Strength, and the speed loss of the Brave Bow is mitigated by the Brave Bow's effect. Rescue dropping her ahead is a good idea, should using Igrene be desired.

A major factor in Igrene's usability is the design of Binding Blade's enemies, especially on Hard. They have high defenses, meaning few characters can one-round them, and high offenses, meaning the risk of a counterattack is very real. Both of these things give Igrene a good niche, since she can deal reliable damage to an enemy (allowing an ally to finish them off) and usually not risk a counter in the process. Enemy Wyvern Riders are also a major threat, and Igrene can one-round them fairly reliably with her Killer Bow, even at her base level, though she will struggle a bit against the stronger Wyvern Lords. If the player deploys her against Wyverns, they should be mindful of their ranges; Igrene can generally only survive one hit from a Wyvern on Hard.

Overall, Igrene is a good pre-promoted Sniper offensively, but do not be too reckless with her, as she is a bit fragile.

Nabata Protector
Daughter of Hawkeye and protector of Nabata. Although she has lost her family, she is stalwart in her duty. Appears in Fire Emblem: The Binding Blade.

Ninja of Nabata
Daughter of Hawkeye and protector of Nabata. She appreciates the utility of the ninja garb and the mobility it grants. Appears in Fire Emblem: The Binding Blade.

Igrene - Guardian of Nabata (ナバタの守護神 Nabata no Shugōshin, lit. Guardian God of Nabata)
"After saying that she would return to Nabata, Igrene disappeared. There are records of people seeing her in various places around the continent, but no one knows where or how she led the rest of her life."

Igrene is illustrated in the trading card game Fire Emblem Cipher with the following cards: 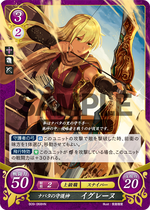 Igraine, in Arthurian legend, was the mother of King Arthur, married to Uther Pendragon. Her first husband's name was Gorlois (which is, interestingly, Astolfo's original name), the Duke of Cornwall.