Ilyana was born and raised in a town in Daein. She eventually decided to become a mage and left home to seek employment. When she first started out on her journey, life was particularly difficult, as she was often unable to satiate her hunger, causing her to collapse frequently. During one of these fainting spells, Ilyana was found by a merchant caravan and nursed back to health. To repay their kindness, she decided to stay with the merchants, acting as their bodyguard with her magic.

A few years later in Radiant Dawn, Ilyana and the rest of the merchant convoy are captured and held in Gribe Prison by Begnion’s occupying forces in Daein. In Chapter 1-3, she joins the Dawn Brigade after Sothe rescues her, Aimee, and Micaiah from a Daein prison. Ilyana will then assist Micaiah on her quest to liberate Daein from Begnion's rule. After the Dawn Brigade's final victory at Nevassa, Ilyana leaves Daein with the rest of the caravan.

Later in Chapter 3-2, Ilyana joins Ike's group when her merchant convoy arrives in Begnion. As the war continues, she fights in the Apostle's Army alongside the rest of the Greil Mercenaries. After the war, Ilyana continues to travel around the continent of Tellius with the merchant convoy.

Ilyana is best known for her voracious metabolism, causing her to remain ravenous no matter how much she eats, to the extreme that she can and will collapse even after having consumed large meals. Ilyana's support conversations with Mia in Path of Radiance show this taken to a hilarious extreme, where she gets so hungry to the point that after collapsing onto the floor, she begins to nibble Mia's boots.

Ilyana's huge appetite has also greatly influenced her memory. Although she is terrible at remembering people’s names and faces, she can perfectly remember the names of people who have treated her to delicious meals or are good at cooking, including Heather, Zihark, and Gatrie. And when first encountered in Radiant Dawn, Ilyana is observed to express her anger over being served inferior-quality food in meager quantities while in prison.

Ilyana shares a unique bond with Zihark, although its extent is neither explicitly confirmed nor explored by the games. This can first be observed when Ilyana meets Zihark in Chapter 1-5 of Radiant Dawn, where she comments that it has been "too long" since she last met him, remarking that she often thinks of him. Chapter 3-7 further fleshes out this bond, where Zihark will refuse to attack her, claiming that he has known her for a longer time than the other members of their armies. If the pair share a transferred A support from Path of Radiance, Ilyana will be able to convince him to defect from the Daein Army and join the Greil Mercenaries.

* Depends on player's choice.
** If her weapon rank is still at E before promotion.

Ilyana has a higher Strength growth than Soren and Tormod, which means she loses less attack speed from wielding tomes, a trait that may be able to compensate for her relatively low Speed growth. Despite her higher Strength growth, giving Ilyana staves instead of knives upon promotion is helpful, as knives require very high Strength to be powerful in this game, and Ilyana usually will hit harder with magic anyways. Pairing her up with someone will fully utilize her useful Shade skill, especially support options like Mia and Gatrie. Her average magic rating among the playable Sages is compensated with her excelling in thunder magic, the strongest tome type in the game; though thunder magic is the least accurate among the usable magic types, she has a decent skill growth rate to balance it out.

* Only if Thunder mastery rank is at B or lower.

** Only if Fire/Wind mastery rank is at E.

In Radiant Dawn, Ilyana returns as the only playable Thunder Mage. As the only playable character who can achieve SS rank in Thunder, she is the only one capable of using Rexbolt. With her improved growths in Magic and Skill, the offensive problems associated with Thunder magic in Radiant Dawn may be compensated for to an extent. Ilyana can be a useful backline attacker (and later healer), but her Shade skill greatly improves her survival ability around other units, so she can be used in less defensive formations as well.

Ilyana is recruited in Part I, but then leaves the Daein Liberation Army to join the Greil Mercenaries for the most part of Part III. As this gives her the best availability of any unit in the game, over-using her in Part I is not recommended, as the Daein Liberation Army needs all the experience possible to reduce the difficulty level of Chapters 3-6, 3-12, and 3-13. If Ilyana is trained to a reasonable level and is chosen to be an Endgame character, she will potentially be able to reduce the difficulty level of Chapter 4-E, as she is capable of exploiting the blessed Rexbolt tome's ability to immense damage to the Dragon Laguz or strike from afar with a blessed Bolting. This will allow her to assist in the fight against Dheginsea, assuming her speed does not fall behind.

If given the proper training in Path of Radiance, Ilyana will receive data transfer bonuses.

Hungering Mage
A girl whose constant hunger pangs cause stress for her and worry for others. Has a seemingly bottomless stomach. Appears in Fire Emblem: Path of Radiance.

Treat Harvester
A mage always on the verge of collapsing from hunger, attracted to the harvest festival by the sights and smells of delicious foods. Appears in Fire Emblem: Path of Radiance.

Awakened Appetite
A girl who is endlessly hungry. She has a knack for magic, but...how many Heroes' worth of rations will it take to satisfy her appetite? Appears in Fire Emblem: Path of Radiance.

Against Sothe in Part 3 Chapter 7

Ilyana: Hello, Sothe...
Sothe: If you’re here with the Greil Mercenaries, does that mean the caravan is with you, too?
Ilyana: Yes. Everyone is back together. Why don’t you join us? You should bring Micaiah, of course. Everyone is worried about you two...
Sothe: I’m sorry, I can’t...
Ilyana: I see... I’m sorry, Sothe.

Against Zihark in Part 3 Chapter 7

Ilyana: Hello, Sir Zihark.
Zihark: Ilyana... You’re on their side, too?
Ilyana: And you stand with the enemy...
Zihark: I don’t know why, but it feels like you’ve been in my life longer than the others. I couldn’t handle it if you got hurt. Ilyana, please pull back before something awful happens. I beg of you.
Ilyana: Oh, Zihark...

Against Jill in Part 3 Chapter 7

Jill: Ilyana? You’re with the Laguz Alliance? No, I mean the Greil Mercenaries?
Ilyana: Yes. Muston and the others are with me, too.
Jill: I see... We fought together in Ashnard’s War, and in the war to liberate Daein. We didn’t spend much time together, but you were a trustworthy comrade.
Ilyana: Thank you... I wonder why we’re here. Why is Daein attacking us?
Jill: I don’t know. The occupation soldiers left Daein. But Daein still cannot refuse a request from Begnion. Liberation was only a dream.
Ilyana: Yet you continue to stay with the Daein army? Why do you do that to yourself?
Jill: Because I can’t abandon my comrades.

Against Sothe in the Part 3 Endgame

Ilyana: Hello, Sothe. Shall we get started?
Sothe: Uh, I thought you’d hesitate to fight me. I’m... a little surprised.
Ilyana: You’ve made your choice, Sothe, and I’ve made mine. It’s really that simple, isn’t it? Anyway, I’m starving. If I don’t eat something soon, I think I’ll pass out...
Sothe: Well, we can’t have that. Ready when you are, Ilyana.

Against Tauroneo in the Part 3 Endgame

Ilyana: ...Sigh.
Tauroneo: Taking a break on the battlefield? Things don’t seem to rattle you, Ilyana.
Ilyana: I’m not taking a break. I’m just sad I have to fight against you, General. Well, that, and I’m really, really hungry right now...
Tauroneo: I should’ve known. Let’s get this over with so you can get back and have something to eat.
Ilyana: ...General Tauroneo, I hope we can meet again under different circumstances.
Tauroneo: I hope so as well, Ilyana. We’ll have to see what happens.

Against Nailah in the Part 3 Endgame

Ilyana: Wolf Queen...
Nailah: Ilyana. I am not familiar with beorc magic. You might actually stand a chance, if you strike quickly.
Ilyana: Um, OK... But... Queen Nailah? Would you promise me something? If we both live through this, will you take me for some good Hatari cooking?

Against Pelleas in the Part 3 Endgame

Pelleas: Ilyana... I’m sorry. If I were a better king, this wouldn’t have happened. I’m sorry...
Ilyana: Your Majesty, I don’t know what’s happened. All I know is that my friends are hurting each other. If that means I have to stop you to save them, then I’m going to try. I’m sorry...

Against Zihark in the Part 3 Endgame

Zihark: Ilyana, we’ve no time for doubts now. This mess has to finish its course. Let’s get this over with.
Ilyana: Sir Zihark... I wish it didn’t have to be this way...

Against Jill in the Part 3 Endgame

Ilyana: War is always sad. It never changes. It is always cruel. Can’t we just pretend that it’s all over?
Jill: I know. No matter how many times you experience it, you can never get used to it. But no, Ilyana, we can’t. I’m sorry.

'Muston and the others are going to Daein, and I think I'm going to go with them. Thank you for everything, General Ike. Hmm... I hope they packed enough food... I'm pretty hungry...'

Ilyana returned to travel with the merchant caravan as she had before. Somewhere, right now, she is hungry.

A character based on Ilyana appears in Tokyo Mirage Sessions ♯FE as a staff member of Cafe Seiren. She offers a few sidequests to gather ingredients for new menu items that the player can order once they are completed.

Ilyana is illustrated in the trading card game Fire Emblem Cipher with the following cards: 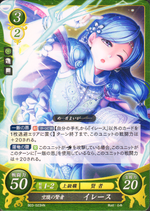 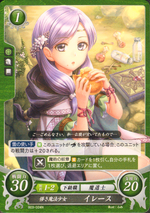 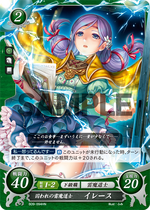 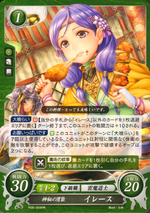 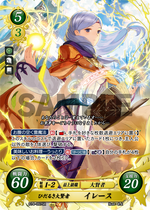 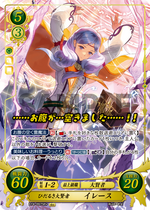 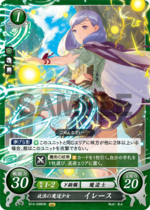 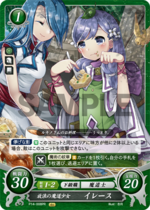 Ilyana is a corruption of Iliyana, a name that has been changed and altered throughout cultures; Iliana (Spanish) and Ileana (Spanish and Romanian). In Romanian folklore, she was kidnapped by monsters and rescued by a heroic knight, which is rather similar to Ilyana's situation in Path of Radiance.